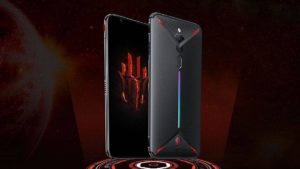 The idea of a dedicated gaming smartphone has always been attractive, but it’s only in the last couple of years that the idea has taken off, thanks to brands like Razer and Asus. Props to the now ever-growing gaming market, new players are now competing for the ultimate gaming smartphone tag. One of them is the 2019 latest entry Nubia Red Magic 3.

Starting at just ₹ 35,999, the Nubia made Red Magic 3 could be a contender for consumer attention simply by the spec sheet alone.

Nubia has taken gaming aesthetics very
seriously with Nubia Red Magic 3, This can be
seen by RGB strip at the back and dark colors
of red and green accent. Surrounded by the
aluminium body, the phone looks sturdy and has a gaming vibe to it.

Red Magic is an absolute beast in terms of display, it has a massive 6.65-inch display along with the full HD+ panel and a resolution of 2340 x 1080 pixels. Furthermore, the 90 Hz refresh rate also makes it run along with the One Plus 7 Pro. Apart from that, colors and contrast are good as well.

Though being a gaming phone, it’s not expected to have groundbreaking camera system. But it does pack in Sony’s IMX 586 sensor with the 48 MP rear camera (very same as found in OnePlus 7 Pro). On the front, it has a 16 MP selfie camera. Overall the photos are surprisingly decent. The camera is also able to record “8K” resolution however the catch is that it can only capture 15 frames per second which are significantly lower than the standard video capture.

The performance of red magic 3 is top-notch. It is powered by Qualcomm Snapdragon 866 Octa-core processor along with RAM options of 12/8/6 GB. Its speakers are also pretty loud and capable of high-quality sound reproduction. These speakers are DTS:X/ DTS 7.1 with 3D Sound Capability. The red magic 3 also features a massive 5000 mAh battery with up to 30W fast charging. The back of this smartphone is accented with a series of LEDs shining from within. Near the bottom of the back is the Red Magic logo. Now coming gaming, its where this device sets itself apart. Once you flip the dedicated red switch for gaming, this transforms the phone into a gaming space environment, where all the buttons and gestures are given over to the game. Besides this, the dedicated cooling fan also helps in keeping the temperature cool while intense gameplay. This fan and a channel are made of metal through which air is moved, all above a section of thermal foam. It also has bumper buttons on its side that can be used as the”Floating L” and “Floating R” buttons while playing games. Overall this is a decent gaming phone with significantly high-end spec for a mere ₹ 35,999. Because this phone presents a surprising number of positive features, very few drawbacks, and a top-notch overall package this phone is highly recommended for gamers.