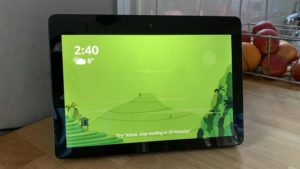 Amazon launched its 2nd Generation of echo show which feels like a more sleeker, louder, and features loads of new touch-screen features, all for the same price of its 1st generation echo show. Moreover, it also addresses nearly all of the issues with its original model, with the promise of even more useful features in the future. Let’s find more about this Amazon’s latest echo product.

The 2nd generation of Echo show is priced at same $229 tag or ₹ 22,999 in India. This also makes it the most expensive echo product by Amazon. Though the best time to buy this will be the frequent Amazon’s sale events where you can easily get a nice discount for the echo show.

In terms of design, the 1st generation echo show was nothing flashy. It was all sharp edges surrounded by black plastic which was easily prone to fingerprints smudges and generally boasted an uninspired look. Though the 2nd generation of Echo Show has an all-screen front with thick black bezels and speakers have been shifted to the back. This has made the Echo Show 17mm thicker than its predecessor, this way it gets more real estate for the display and speakers. Overall it looks like a futuristic mini television, that rests on your desk with that hump on its back.

Since Amazon has moved the placement of its speaker, the new echo show with 1280 x 800 resolution looks much more like a miniature flat-screen TV. Moreover, the colours are now more bright and vivid which also makes the overall viewing experience nice. Furthermore, I think we can expect a sharper display in the future since technology is rapidly getting better.

Amazon Echo Show features upgraded side-firing speakers which can fill a room with sound quite easily. The music is louder and clearer than any Amazon speaker so far. The echo show also displays the song lyrics while playing the music which is a pretty handy feature. Moreover, since Amazon has partnered with Dolby, therefore you can be sure that the sound will be quite good with its 10.1 inch HD screen.

Aside from the new display and audio, the Intel Atom-based Echo Show has a few other new specs and software enhancements of note. You can also access those smart home devices directly with a swipe on the display. Furthermore, there also and 5 MP camera for HD video calling. You can also use Skype aside from directly using Amazon’s built-in video calling interface for echo devices. Apart from that there total eight microphones on the Echo Show which makes it more responsive to your voice commands. The 2nd generation echo show also comes with the browser so browsing google and YouTube is now possible. Besides this, the Amazon prime video content is also available at your fingertips which is quite useful. Overall the new Echo Show now comes with beefier sound and a larger display than the original. Though I think there is still a room for improvement in terms of its sound quality and its software part too. But nonetheless, the new Echo Show is well-poised to be the essential kitchen device if you’re an Amazon and Alexa devotee.