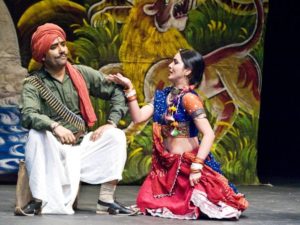 Before the advent of Bollywood, Nautanki was the biggest entertainment medium in the villages and towns of northern India. Nautanki’s origin lies in the Saangit, Bhagat, and Swang musical theatre traditions of Northern India. Nautanki performances are operas based on popular themes derived from romantic tales, mythology, or biographies of local heroes. The performance is often punctuated with songs, dances, and skits, which serve as breaks and comic relief for the audience. The pleasure of Nautanki lies in the intense melodic exchanges between two or three performers, and at times a chorus. Traditional Nautankis usually start late at night, often around 10 p.m. or so, and go on all night until sunrise the next morning (for a total of 8–10 hours).

Written in the 1920s by Roopram, a writer of Natharam Gaud’s Nautanki troupe, this Nautanki is the story of Sultana, the famous dacoit of early 20th century. Sultana Daku, the ‘benevolent dacoit’ is an equivalent of England’s Robin Hood, who steals from the rich and gives to the poor with the help of his gang of three hundred dacoits. Sultana’s love was Phoolkanwar, a tawaayaf (dancer), who lived with him in the jungle. The present Nautanki portrays that ironically, Sultana was betrayed by a poor person, whom he helped with money.

Dr. Devendra Sharma is a Professor of Communication and Performance at California State University, USA. Dr. Sharma introduced and popularized Swang-Nautanki in America and Europe. He was trained in the famous Samai-Khera Gharana by his father guru Pandit Ram Dayal Sharma, and in film direction at University of Southern California (Cinema School). Dr. Sharma has been invited as a professor of media and communication, and to perform, direct, and produce musical theatre shows at renowned institutions such as the University of Oxford, University of London’s School of Oriental and African Studies, Columbia University, Cornell University, University of California-Berkeley, University of California-Los Angeles, and University of Texas -Austin. In 2010, he was invited by the world-renowned Théâtre du Soleil in Paris, France to train French actors in Nautanki. In 2012, he was a visiting professor and Director-in-Residence at the Film and Television Institute of India (FTII) Pune.

Pandit Ram Dayal Sharma is a living legend of Swang, Bhagat, Nautanki, Rasiya, and Raaslila musical theatre traditions of north India, and is the present guru of Samai-Khera Rahasdhari Gharana. He is a famous singer, composer, actor, writer, director, and has performed more than 2000 shows all over the world. Panditji has been a visiting professor of Nautanki at the National School of Drama for more than three decades, and has taught music at many universities. In addition to numerous other awards, Panditji was awarded the Sangeet Natak Akademi Award for Nautanki by the President of India in 2015.