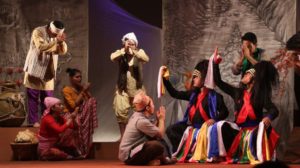 The Play
This is a tale which revolves around the life of a couple that leads an ordinary life and bicker incessantly. The wife is depressed about how her life turned out to be and hopes for salvation. One day the God of Death, Yama sends his messengers to inform her that she has only twenty-four hours from now to live, after which she would depart from the earth. The husband grows furious when he learns of this but is later deeply saddened by the news. He gradually realizes how precious his wife is to him. The wife, knowing that her end is near, tries to live her entire life within the span of a day. The play follows how the husband finds ways and means to fight the order of universe and dissuade the God of Death from taking her away.

Director’s Note
The Gond tale, on which the play is based, deals with the ingenuity of a man who wants his wife to live. The story reflects the imagination of a community which places men and Gods in a frame of combat that has reference both in the might of the divine and human behavior. The tale talks of a time when Gods personally came to earth to take a person away at the time of departure from earth. This is also a moment of reckoning, of being born anew and a rediscovery of the world. Set in the midst of mist and clouds, the performance creates a narrative of fantasy. The simple minded clear focus of husband contrasts with that of wife’s emotions oscillating between life and death; and the narrow minded avarice and complacency of others around. The logic that a woman cannot go without her husband’s consent is carried to extreme in order to keep her away from death. The tale with its ambiguity intrigues. The man is both villainous and heroic. The triumph renders possessiveness, tempered with love and integrity, almost a virtue. It was a rare opportunity to explore the tale with the actors of the Repertory Company of Sikkim, NSD. Each moment was full of spirit and delight.

The Director & Playwright
Prof. Tripurari Sharma, born in 1956, is a graduate from Delhi University with Honors in English Literature. She completed her diploma from NSD in 1979 with specialization in Direction. She has written and directed a number of plays and has been associated with several theatre groups throughout the country and abroad. She has written scripts of critically acclaimed films like Mirch Masala and Hazar Chaurasi Ki Maa and has also written and co-directed a few short films on the theme of the adolescent girl child and has been associated with the Street Theatre Movement. Prof. Sharma has travelled with her group to Norway, England and Pakistan and represented India in the first Women Playwright‘s Conference in USA, 1988. She was honored with the Sanskriti Award, Delhi, in 1986 and also by the Delhi Natya Sangh in 1990. In 2013, she was conferred with the Sangeet Natya Akademi Award for her immense contribution in the field of theatre direction. At present, she is a Professor of Acting in the National School of Drama.

The Group
Sikkim Theatre Training Centre is the first centre of the National School of Drama outside Delhi established in the year 2011. Situated in the lush green picturesque valley of Gangtok, the centre offers a year-long extensive training in theatre. In 2012, the centre started its Repertory Company in which students from the previous year’s training program are selected as artists.