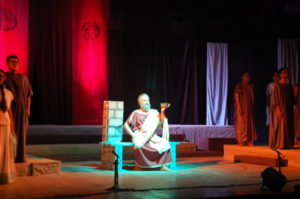 The Play
Socrates is a classic testimony of the most remarkable period of Greek history (Peloponnesian War period). The story dawns with the era of the staunchly democratic leader Pericles and his years of contribution towards the society of Athens, and culminates when Socrates, the brilliant thinker, is sentenced to death by a venom quaff. Greeks are known for their superior body built, and exquisite features. However, the story forms Socrates’ image as ‘protuberant lips, flat nose, huge and lost eyes’ which is quite different from typical Greek masculine features. Who can call such a differently looking and thinking human an enlightened personality? What was ‘true wisdom’ to Socrates?

Director’s Note
I have genuinely felt that the nation’s democracy is blemished through the deceitful acts of derision and shady deals. This instigated and inspired me to show the speculum of Socrates to the society that is governed by mockery and corruption. The apostle of Nirvana, Lord Buddha, has paid the utmost reverence to the tyranny of citizens, meagre and lavish alike. This has built within me, an acute conviction and faith in the autonomic form of government. My forthright rationale to stage this classic is to give the society an aspiration as its law systems and governance are undergoing a very delicate phase.

The Director
Rajoo Barot, an NSD Graduate (1977), is an actor, director, singer, documentary film-maker and light designer. He is the founder of the Ahmedabad Theatre Group, and the initiator of documentation and promotion of theatre songs of Gujarat through a group activity titled Tarz-e-Thatter. He has directed several commercial television serials and has travelled extensively with the NSD Repertory Company. He has received many awards such as the Sangeet Natak Akademi’s Gaurav Puraskar, Information Department of Gujarat’s Best Documentary Award, and the Best Playback Singer Award for the film Dikari Mari Vhalno Dario. One of his most appreciated works is Haiye Ham to Tarasnu Na Rahe Tham, which he made for the Pravah Drinking Water & Sanitation Campaign, and which was performed by 50 groups in their own dialects and traditions in more than a thousand villages in Gujarat.

The Playwright
Bharat Dave did Diploma in Direction from National School of Drama, Delhi in 1976. He retired as the Chief Producer, Video Production Group, Development & Educational Communication Unit (DECU) of Indian Space Research Organisation (ISRO) Ahmedabad after serving for 32 years. He was in USA for the Fulbright Internship programme in the field of communication technology in television programme productions and public broadcasting. He received the Gaurav Puraskar 1991 for the commendable contribution to Gujarati theatre.

The Group
Ahmedabad Theatre Group, was set up in 1992. It has produced and performed many plays reflecting its vision. ATG has been invited many times to participate in the international drama festival Bharat Rang Mahotsav organised by NSD, New Delhi and has also participated in the 8th Theatre Olympics with the production Paritraan at Mumbai.