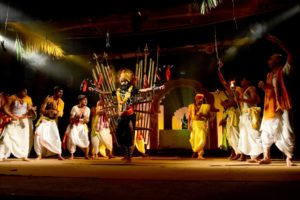 The Play
The Bhakti Movement flourished in Eastern India, and the temples provided shelter to the destitute, abandoned children, widows and community dancers. The play talks of a modern day situation where, as time passes, darkness spreads on those glorious days. The priest, failing to receive patronage of the modern generation, is accused of inheriting temple property. The successor, a differently abled and abandoned child once picked up by the temple priest, shoulders the responsibility of the spiritual world. The spiritual world of women and the devadasi tradition are accused of prostitution. The last hope of the destitute suffers major losses in the claws of modernity. The prayers are often interrupted by DJ’s music that profoundly challenges the existence of traditional bhajans and dances. Threatened, abandoned and unprotected, the temple shrine suffers much on all fronts. It becomes a meeting places for junkies who steal temple ornaments for drugs and accuse the priest for the theft. A vicious plan to smuggle a two thousand year old Krishna idol is about to be executed by robbers when the differently abled priest self immolates himself along with the idol, destroying the attempt of plunderers, thereby offering the last ‘rite’ to the lord. The plot is centred on changes and transgressions of human attitude towards religious devotion, and how the new generation responds to devotion and spirituality.

Director’s Note
This widely acclaimed story by Mohapatra Nilamani Sahoo was considered for production for its emotional and spiritual values, devotion to God, and of the laudable concept that in modern times too there exists spiritualism and devotion. The play blends folk dance, classical music, culture, rituals and customs of Odisha.

The Director & Playwright
Nalini Nihar Nayak is not only a well-known theatre director of Odia plays but also an actor, designer, and music composer. He earned his Masters and M.Phil in Drama (Direction) from Utkal University of Art and Culture. He is now pursuing Ph.D. in Analytical Practice with Classical Indian Theatre. He has also learnt Chhau dance in Mayurbhanj style. He has received prestigious awards like Ustad Bismillah Khan Yuva Puraskar, Rajiv Gandhi Professional Award, National Youth Award, Konark Samman, Master of Odisha Award, Baisakhi National Excellency Award, Shrestha Natua Samman and more than 120 Government and Non-Government awards. He has acted in about 80 play and directed about 35 plays staged in India, Malaysia, Singapore, Bangladesh etc. Nalini is serving as a student activity officer at National Institute of Technology, Rourkela and is striving hard to encourage the students towards art and culture.

The Group
New Quest Repertory made its debut in the year 2003 under the visionary leadership of Nalini Nihar Nayak, with the objective to train young artists in theatre and resurrect the dying art forms of Odisha. It has participated in the theatre festival organised by Odisha Sangeet Natak Academi, Yuva Pratibha Mahostav by Sangeet Natak Academi, New Delhi; Experimental theatre festivals by EZCC, Kolkata; National Youth Festival; Bharat Rang Mahotsav by NSD, National Theatre Festival by Bharat Bhavan, Bhopal; Konark festival and many more across the country, besides theatre festivals organised by government and non-government organisations.