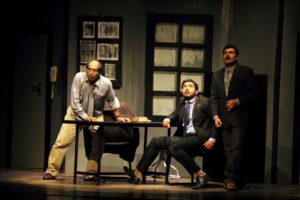 The Play
The Department is a play inspired by Harold Pinter’s The Hothouse. The director of the department, Roote is stressed to the point that he is losing his sanity. His subordinate Gibbs is so ambitious that he undercuts his authority; subordinate Lush is an alcoholic; and his mistress, Miss Cutts, is scheming and having an affair with Gibbs. One of the patients at the house is supposedly murdered, and another is raped and impregnated, so Roote assigns Gibbs to investigate the matter. However, all evidences point to Roote as the perpetrator, and Gibbs takes over, leading to further mayhem.

Director’s Note
The play is wrapped around a disoriented officer in a certain department of a powerful state where the rulers are all out to remain in power using unacceptable ways and means. The psychiatric unit run by this department calls patients by numbers and not by names. A retired dictatorial army officer by the name Roots is in charge of this unit and its officers are called by indicative short names such Gibbs, Labb, Kates, Tubb, Pate etc… Patient number 6457 passes away in a mysterious suspicious manner, and in a very short time an employee of the institute gives birth to a child. Murderers and rapists are freely moving in the society. At the end Gibbs who is meeting with the superior higher officers of the department complains that all the officers except him were murdered by the patients. This raises the suspicion that Gibbs himself did these….

The Director & Playwright
Buddhika Damayantha is one of the few theatre directors in Sri Lanka who is engaged full-time in this profession. He has directed 18 Sinhala plays, out of which 17 are adaptations of world renowned classics, such as the works of Beckett, Albee, Williams, Schisgal, Fugard, Pinter, Arbuzov, Tendulkar, Ibsen, Simon, Rivera and Shakespeare. During his illustrious career, Buddhika Damayantha and his plays have won many significant awards at the state drama festivals held annually in Sri Lanka. Buddhika Damayantha is a dedicated theatre enthusiast who strives to uphold his responsibility as an artiste and works for the betterment of his profession and the quality of Sri Lankan theatre. He dedicates a lot of his time conducting workshops and various other activities to enforce theatre education among youth in Sri Lanka and to invoke the enthusiasm for thought-provoking theatre in society.

The Group
Red Wings is a theatre group actively contributing in the field since last decade. It makes efforts to promote plays in the country by conducting workshops for beginners and introducing various new trends and significant changes in the field. Being a trainer as well as an ardent learner, the group has conducted many training sessions and workshops in the past. During the period when the country was severely affected by civil war, Red Wing made a tremendous effort to preserve Sinhala stage and attract the audience. One of the main objectives of the group is to inculcate love for the stage among the people.

Watch Meet the Director segment for this play