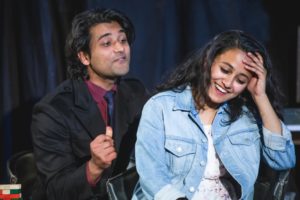 The Play
The story takes place in a modern, provincial town that is in the Russian countryside and simultaneously far away from it. The three Prozorov sisters, Olga, Masha, and Irina, are celebrating the 20th birthday of Irina, the youngest. Moods are light and festive, despite this also being the first death anniversary of their father. The play is a window opening into four moments across four years of their lives, showing the emotions that humans experience in a lifetime. The sisters spend their days longing for their youth in Moscow and staving off malaise with the officers from the nearby artillery post. As the years pass, the sisters fall in and out of love, attempting and failing to create the beautiful life they dream of. Unfulfilled in work and in love, they face despair as Moscow becomes a continually more distant dream.

Director’s Note
Though set in a traditional 1900s provincial Russian town, this production is reimagined into a modern, less classically Russian setting to make it relevant for South Asian audiences. One thing I adore about the play is that the Prozorovs’ world is as real and full as the one we know in our daily lives, and that is the lasting beauty, and heartache, of this show. We cannot help but see ourselves in each character. We cannot help but feel what they feel. Whether Russian or Nepali or somebody else, this play speaks to what it means to work, to suffer, to love… to be human.

The Director
Rose Schwietz is a director, actor, musician, and teacher currently based in New York City. She has directed five shows—most recently Chekhov’s Three Sisters and Stoppard’s Rosencrantz & Guildenstern Are Dead—with high school and professional actors. Acting credits include notable stage roles (Mrs. Edith Frank, Lieutenant Colonel Vershinina) as well as leads in ads, short films, and one feature length film. She is an accomplished musician, with years of training in voice, saxophone and piano, and performs regularly in Kathmandu and New York City. She teaches in theatre workshops for students and professional theatre-makers in the US, Nepal, and India. She also works with the Wooster Group and SITI Company. Her interests include discovering new cultures and places, literature, crossword puzzles, and taekwondo.

The Playwright
Anton Pavlovich Chekhov (1860-1904) was a Russian medical doctor, short-story writer, and playwright. He is considered one of the originators of early modernism in the theatre. He worked closely with Stanislavsky and Moscow Art Theatre later in his career. He is most famous for his four classics: The Seagull, Uncle Vanya, Three Sisters, and The Cherry Orchard.

The Translator
Paul Schmidt (1934-1999) was an American translator, poet, playwright, and essayist. His work as a translator led him to serve in the US Army Intelligence; his work in mime and acting with Marceau and Charon led him back to the theatre. He taught at a Texas university and at Yale. He wrote several plays, and is best known for his translations of Euripides, Chekhov, Brecht, Genet, Gogol, and others.