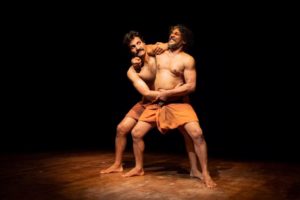 One of the unsung heroes of the Indian epic Ramayana is the army of monkeys from the land of Kishkindha that helped King Ram win his war against the demon king Ravana. But before these simian soldiers followed him into war, the ruler of Kishkindha, Bali commanded them. A meditation on justice, ethics and morality, Adishakti’s Bali is a retelling of the crucial events surrounding the death of king Bali, which helped Rama to ally himself with the army. Through a seamless transition from the epic to the everyday, Adishakti’s Bali explores the notion of right and wrong in this tale of brotherhood and revenge.

The Indian epics, Ramayana and Mahabharata, have shaped our country’s politics, arts and culture. Its stories have been retold and its characters reimagined in many ways through various retellings, which have been a part of the literary and performative traditions in India. Each retelling has challenged the traditional narrative by subverting the dominant versions of the text to throw a light on various other interpretations. Often, these interpretations strongly reflect the writer’s subjective preferences with respect to his/her identity and ideologies. An excerpt from the Indian epic Ramayana, Adishakti’s Bali is a retelling of various events that led to the battle between Bali, the ruler of Kishkindha and Ram, the King of Ayodhya and eventually, the death of Bali. Here, the writer has tried to explore the notion of right or wrong through its various characters, while steering clear of any subjective influences. Through this play, we explore how one evaluates this notion, and how it can change when each and every character is given an opportunity to voice thoughts and opinions. The play weaves multiple stories through the points of view of Bali, Tara, Sugreev, Angad, Ram and Ravan and talks about how each of them make decisions and take actions based on the ethics that define their lives.

Nimmy Raphel studied Mohiniyattam and Kuchipudi dance in Kerala Kalamandalam from 1995-2001, and has performed all over India. She is currently a resident actor, dancer, musician, and puppeteer at Adishakti, practicing its methodology of theatre since 2001. In 2010 Nimmy received the APPEX Fellowship, which took her to Bali. She collaborated with Indonesian dancer Sardono W. Kusumo to create a theatre production called Rama, Hanuman, Ravana which premiered in Adishakti. The production also went to The International Conference on Ramayana: Reinterpretation in Asia, in Singapore. In 2012 she was part of an exchange programme held in Korea between Adishakti and the performing group Tuida. As part of Adishakti’s three-year Ramayana Project, in 2011 she created a play called Nidrawathwam which she wrote, directed, and performed in. Nimmy was also the recipient of the Junior Fellowship from the Ministry of Culture for the year of 2012-13. She is currently performing in the play The Tenth Head directed by Veenapani Chawla, and also in Veenapani’s next production, Sita. Nimmy is also a recipient of Vinod Doshi Fellowship in 2015.

Adishakti Laboratory for Theatre Art Research was founded in 1981 in Mumbai. It now has its campus on the outskirts of Pondicherry, where artists and experts from a variety of other fields come for residency programs, sabbaticals, performances and workshops. Adishakti also engages with different spaces and disciplines. Adishakti’s work and experiments are driven, quite simply, by its comprehension of art/aesthetic practice as a unique bridge between a range of diverse realms, which are not normally, or visibly, in communication with each other.

Watch The Director’s Meet for the play