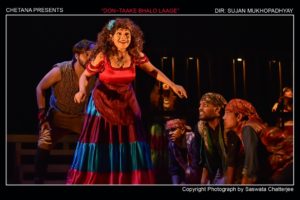 Renowned poet, theatre director, and actor Subhomoy Dutt, has been arrested for his outrageous comments against the state, and locked in custody with other petty convicts. Subhomoy transforms the jail into a stage and starts performing the story of the ‘Mad Knight’ Don Quixote, with all the jail inmates as performers. The prison cell metamorphoses into a space of eloquent metaphors and bizarre events of Don and his mate, Sancho. Adapted into a modern day situation, this musical carnival emerges with forms like Kirtan, Flamenco, Rabindranath’s song, Rock-N-Roll, Toppa and Western Classical.

“To dream, the impossible dream”… has been the quest of Don Quixote, and his squire Sancho Panza. The play begins in a local prison, where a famous playwright, actor and poet, Subhamoy Dutt, is arrested for his illegal step towards the state through his propagandist play. I wish to study today’s terror and ill-tolerance in this “play within the play” through the local jail inmates, who are waiting for their verdict. Designed as an opera, this is a hard hitting musical, questioning our reality, and arguing our existence in the modern socio-cultural situation.

Sujan Mukhopadhyay has acted in about 30 plays and written several scripts for theatre, television and cinema. He was awarded with Stagecraft award for Ghasiram Kotwal and Popular Viewer’s Choice Award for Don..Take Bhalo Lage. He has performed in Mumbai, Pune, Hyderabad, Nagpur, Chennai and all the other cities of India, and major cities of the USA, Theatre Olympics in Agartala, and Bharat Rang Mahotsav. He was awarded the Best Director and Actor awards in various competitive events. He has also directed a feature film Chocolate in Bengali (available in Netflix).

Chetana was founded in 1972. It has produced 33 full-length Plays and 13 short Plays in its journey of 46 years. Chetana received numerous awards and citation from various cultural institutions. It has organised a number of Theatre Festivals, Seminars and Workshops etc., and performed in all the districts of West Bengal and in almost all the major cities of India. Chetana has staged different plays in the Theatre Festivals organised by the National School of Drama and Sangeet Natak Akademi. It has toured USA and Canada with its productions in 1980 and 1990. Chetana performed Mareech Sanbad in Bourdeaux (France) in 1999. Sponsored by the ICCR it took part in the Ibsen International Theatre Festival held in Oslo (Norway) in 2004 and performed in London (UK) the same year.