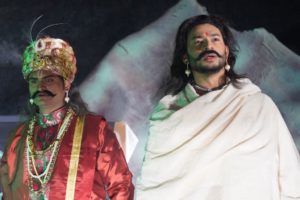 The Great Paika Rebellion of 1817 happened under the leadership of Buxi Jagabandhu, the commander of the forces of the King of Khordha. Colonel Harkot, who was in-charge of the British East India Company in 1803, was planning to capture Odisha, which was strategically placed between Bengal and Madras, after the British had conquered Bengal in the North and Madras in the South. To achieve this, the first target was to make a treaty with Deogan and slowly bring Odisha under the Company’s control. Colonel’s scheme was to conquer Puri via Chilika Lake. Mukunda Dev II was the then king of Odisha. Colonel managed to get Maludar Fateh Mahammad into his fold and entered Odisha. Subsequently, they imprisoned King Mukunda Dev II. The Minister of Mukunda Dev II, Jai Rajguru was brutally killed fighting against the British. In the end, despite Buxi’s perseverance and constant resistance, he was killed by British officer Fletcher and a rumour was spread that a tiger killed Buxi. Fletcher saluted Buxi for his heroism and bravery to protect his motherland.

The play is based on the hero of Paika rebellion, Bidyadhar Bhramarabara Rai. He is popularly known as ‘Buxi Jagabandhu’. With the support of common people, he became the leader of the first rebellion of the Paika (Soldiers of Odisha) against the British Rule. I thought of doing this play, written by Padmashree Manoranjan Das, on the occasion of 200th anniversary of Paika rebellion, to encourage the youth of Odisha by reminding them about Buxi’s heroism, love towards the nation, and the Paika rebellion.

Born on 28th January 1989 in Odisha, Debabrata Pattanayak is a Post Graduate in Drama (Direction) from Utkal University of Culture, Odisha. He has acted in about 30 Odia plays, written 7 plays and designed-directed 25 plays till now. Mr Pattanayak formed his own theatre group Dynamic Platform in 2015. He has undergone serious training under Rudra Prasad Sengupta, Satyabrat Rout and Subodh Patnaik. He has been recognised as a regular practitioner of contemporary theatre in Odisha. Presently he is serving as an Art Education Instructor (Theatre) in DIET, Puri, Odisha. He has been conducting theatre workshops with children and university students in different educational institutions.

Being established as a contemporary theatre group in 2015, Dynamic Platform, has been producing plays since 2013. It was started with a mission to encourage the creative young talent by using theatre as a tool with systematic practice and training. The group has produced many significant plays and has participated in state as well as national theatre festivals such as International Peoples’ Theatre Festival of Natya Chetana, Panchamveda, and Arohan. The group also organises children’s theatre workshops to promote their creative potential and expression.