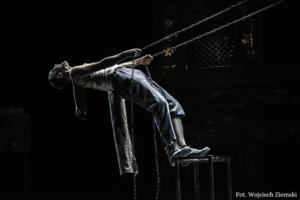 The Play
1920’s – Poland and Lithuania are under Russian occupation. Poles and Lithuanians are deprived of civil rights. They are oppressed, imprisoned or sentenced to forced labour deep into Russia and Siberia. Guślarz begins the ‘Dziady’ feast under the sacred tree. Ghosts conjured up by Guślarz appear for the feast. Ghosts gather in the cosmos. A young man’s ghost seems to be stuck between the sky and the earth. It is the ghost of a poet. The other ghosts reveal their divine plan to him. The young man’s ghost writes an inscription: ‘Gustaw Died, Konrad was Born’. Then he falls to the floor, fainting. The ghost wakes up. He recognizes the cell of a tsarist prison in Vilnius. He starts writing a poem about his imprisonment, inventing his fellow prisoners who are played by other ghosts. The prisoners of Vilnius tsarist prison tell their stories. Konrad himself fights with God. Evil spirits appear in the cell. They flee as a priest comes after being called by the nearby monastery. Konrad has a vision of future events. Konrad receives the gift of prophecy. The prophecy foretells the triumph of the oppressed and the failure of the tyrants. Under the sacred tree the ritual comes to an end. Guślarz walks away along with his ‘Dziady’ ritual.

Director’s Note
Reading Mickiewicz is one thing, understanding Mickiewicz another. But listening to Mickiewicz is a completely different matter. Personally, after two years spent on working on ‘Dziady’, I have an impression that it is one great score. The music is hidden in words; it is a requiem for the martyrs of the ‘national cause’.

The Playwright & Director
After graduating from the Faculty of Theatre Studies at The Aleksander Zelwerowicz National Academy of Dramatic Art in Warsaw, Piotr Tomaszuk became the manager of The Bialystok Puppet Theatre. In the beginning Tomaszuk directed performances for national theatres only – an important play was Turlajgroszek, based on his own screenplay. The presentation of the play led to the founding of TeatrWierszalin in Supraśl. In 2000-2003 Tomaszuk was the manager of the Banialuka Theatre in Bielsko-Biala. At that time he collaborated with BajPomorskiin Toruń, staging his own play Circus Decameron based on the original text by Giovanni Boccaccio. PiotrTomaszuk is the winner of numerous prizes, such as KonradSwinarski Prize, Leon Schiller Prize, the Prize of the International
Theatre Institute, as well as the Fringe First Prize at the Fringe Festival of Edinburgh. In 2006 he was rewarded with the Polish Silver Medal ‘Gloria Artis’.

The Group
TeatrWierszalin was established by PiotrTomaszuk in Supraśl, north-east Poland, in 1991. Plays by TeatrWierszalindraw on the cultural heritage of Podlasie region. Coarse aesthetics of folk art, simple stage design and choral chants are its distinctive features.Critics compare Wierszalin to such phenomena as Jerzy Grotowski&#39;s ‘Laboratorium Theatre’ or Tadeusz Kantor&#39;s ‘Cricot 2’. The group has performed all over the world, including Delhi, Mumbai, Tokyo, New York, Chicago, Toronto, London, Sydney, as well as Germany, Italy and Switzerland.TeatrWierszalin has been rewarded with the prestigious Fringe First award three times. In 1994 Polish Foreign Minister awarded the group with a diploma of recognition for the promotion of Polish culture abroad. In 1998 Wierszalin received the Critics Award of the International Theatre Institute, for its outstanding contribution to world
theatre.