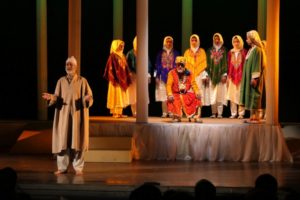 The play Aka-Nandun, which means ‘The Beautiful’, is based on a mystic legend, about a Hindu king who has seven daughters but no son. When he gets old he prays for a son who could inherit his kingdom. A jogi comes in his dream and blesses him with a son on the condition that he should name the son Aka-Nandun and promise to return him to the jogi when he is 12 year old.

Kashmir has a distinctive culture, based on the fusion of Shiv-mat and Islam, which has given birth to a tolerant, mystic and socio-religious philosophy during the last seven hundred years. And this is mostly known as Kashmiriyat. Aka-Nandun is based on a mystic Kashmiri poetic fable, written by mystic poets and endorsed popularly, and which emphasises the highest sacrifice of ones greed, lust, power, ego and worldly luxuries, and submit to the highest authority of the Almighty. The play translates this through the folk format of Daastaan with sublime actions, theatrical visuals and traditional music and dance.

Bhawani Bashir Yasir, born at Doru-Shahabad in Anantnag district of Kashmir, is a post-graduate in Kashmiri literature, a renowned Playwright and Theatre Director, who after passing out from National School of Drama, New Delhi in 1987 with distinction in Stage Craft, preferred to go back to his state to institutionalise the theatre of Kashmir on professional standards, in line with Kashmiri sensibilities. He established EKTA in 1988, now internationally recognised as the authentic theatre institution of the state.

Ensemble Kashmir Theatre Akademi, popularly known as EKTA was founded in 1988 by Bhawani Bashir Yasir after passing out from NSD. EKTA organises a national theatre festival known as Budshah Theatre Festival, in which plays from all regional languages of the state, and special entries from rest of India are also invited. EKTA has participated in many national and international theatre festivals.