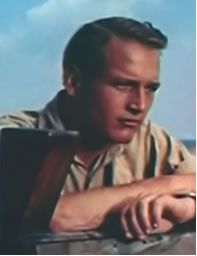 Paul Leonard Newman was more than an American actor, film director, entrepreneur, humanitarian and race car driver, he was as my kid brother lamented,”a part of our childhood”. As a philanthropist , his donations had exceeded US$220 million, by 2007.

On September 26, 2008, Newman died as per his wish at home in Westport, Connecticut, of complications arising from lung cancer.He was born in Shaker Heights, Ohio, the son of Theresa and Arthur Samuel Newman, owner of a sporting goods store. His father was Jewish and his mother practiced Christian Science.Newman showed an early interest in the theater, which his mother encouraged. At the age of seven, he made his acting debut, playing the court jester in a school production of Robin Hood. Graduating from Shaker Heights High School in 1943, he briefly attended Ohio University in Athens, Ohio.

Newman served in the Navy in World War II and hoped to be accepted for pilot training, but this failed when it was discovered he was color blind. He was sent instead to boot camp and then on to further training as a radioman and gunner. After the war, he completed his degree at Kenyon College, graduating in 1949. Newman later studied acting at Yale University and under Lee Strasberg at the Actors’ Studio in New York City. Newman made his Broadway theater debut in the original production of William Inge’s Picnic, with Kim Stanley. His first movie was ‘The Silver Chalice,’ (1954), followed by acclaimed roles in ‘Somebody Up There Likes Me,’ (1956), as boxer Rocky Graziano; ‘Cat on a Hot Tin Roof,’ (1958), opposite Elizabeth Taylor.

He appeared with his wife, Joanne Woodward, in 10 feature films from ‘ The Long, Hot Summer,’ (1958) to ‘ Mr. and Mrs. Bridge.’ (1990). In addition to starring in and directing ‘Harry & Son,’ Newman also directed four feature films in which he did not act starring Woodward.

His last screen appearance was as as a flawed mob boss in the 2002 film ‘Road to Perdition,’ opposite Tom Hanks, although he continued to provide voice in Disney/Pixar’s ‘Cars’. He won the prestigious Le Mans in 1979 himself, an year after he had lost his only 28year old son Scott to drug overdose. 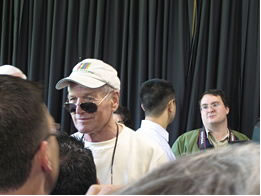 Paul Newman at an announcement for a new ‘Hole in the Wall Camp’, in Carnation, Washington in 2007.

With writer A.E. Hotchner, Newman founded Newman’s Own, a line of food products, in 1982. The brand started with salad dressing, and has expanded to include pasta sauce, lemonade, popcorn, salsa, and wine, among other things. Newman established a policy that all proceeds from the sale of Newman’s Own products, after taxes, would be donated to charity, the franchise has been a source of $200 million in donations

He founded ‘Hole in the Wall Gang Camp,’ a residential summer camp for seriously ill children, first time in Connecticut. There are now several such camps in USA,Ireland, France and Israel. The camp serves 13,000 children every year, free of charge. Paul Newman was nominated nine times from 1958 to 2002, for Academy Award in a leading role or supporting role and yet the Academy gave him the clear nod in 1986 for his role in ‘The color of Money’ only! He was awarded the Oscar as an honourary award in 1985 for his many compelling performances, and then as Jean Hersholt Humanitarian award in 1994 for his charity work. Maybe because Paul Newman was always there year after year keeping us enchanted, by those sparkling blue eyes. But then as his best friend for decades, the other half of the legendary duo, Robert Redford probably sums up the kind of man that Paul Newman was; “This was a man who lived a life that really meant something and will for some time to come,” Robert Redford said about his late friend and co-star, Paul Newman.

Robert Redford and Paul Newman in the 1969 film “Butch Cassidy and the Sundance Kid,” directed by George Roy Hill.

You will be missed Mr. Newman by everyone, whose part of childhood you were! – Naveen K. Gupta.