Dreams of Talim – A Tribute to Chetan Datar 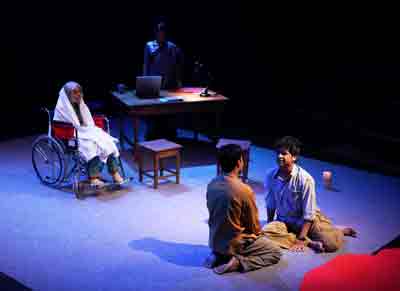 Last year in BRM (the 12th Bharat Rang Mahotsav)  when  I saw Sex, Morality and Censorship, directed by Sunil Shanbaug, I was quite impressed. And not only me, the entire  Kamani auditorium  was electrified when the performance was over.

This year Sunil Shanbaug has brought another production Dreams Of Talim, written by Sachin Kundalkar. But it there is also a story behind it, which is essential to be told if you want to fully understand this. Actually, before the play starts, the story is told before the audience. It is about late Chetan Datar, a talented theatre person who died young in 2008. Chetan had written a monologue title `No I Madhavbagh’ around 2004. It was never staged during his lifetime.

After Chetan’s death Sunil decided to do one of Chetan’s text on stage as a tribute. Then came Sachin Kundalkar for his support. Sachin wrote a full length play based on Chetan’s monologue. The result is Dreams of Talim.

It is a play about alternative sexuality, an emerging discourse in Indian society. The problem of alternative sexuality is that it is taboo. Despite that it has won a legal battle, the society at large doesn’t accept it, the family abhors it. The play deals with this `taboo’, the issues, questions and passions associated with it.

It has four characters, Anay, Yash, Sita and Sita’s mother. Anay is a young theatre director. He is abandoned by   all his colleagues and friends except one, Yash who still admires him. Both the boys are in special relationship (gay) with each other. Meanwhile, Sita, an actress come in their life. She showed her willingness to act in play which Anay wants to direct a play. When the rehearsal get started the problems of alternative sexuality arise on different planes. Anay is individually facing the problem and Sita is finding it difficult to come to terms with it on emotional level. Simultaneously    many issues about love, theatre and relationships emerge.

The strength of Dreams of Talim is its acting. All the actors, Anand Tewari as Yash, Suvrat Joshi as Anay, Geetanjali Kulkarni as Aai and Divya Jaddale as Sita, give commendable performances.  There is an element of fantasy also in the play which makes it a little bit surrealistic. The play was multi-lingual with a mix of  Hindi and English.