The Dilemma of Chhau – Problems of Being Folk by Gouri Nilakantan 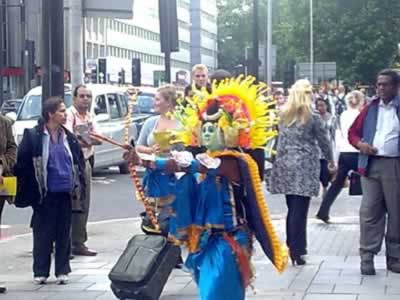 Chau Dance on The BL Piazza

To categorize and delineate any dramatic performance as being folk, traditional or modern would be simply dispensing them off that can endanger our readings and interpretations for it.  All dramatic performances display set codes and conventions such as costumes, makeup, text, use of diction prose or poetry and evolved choreography, movement or premeditated action. My attempt in this thesis is to look at Chhau as one such dramatic genre that goes beyond such simplistic compartmentalization.  Chhau is definitely one such performance that uses tradition as its material, however it does not conform to any one set standard or benchmark which can be seen by the introduction of females as performers in an all male form.

A new identity are thus being assumed by the participants while there is a fair amount of continuity in the subject and it has seen some amount of stability in its dramatic content, costumes, music, plot and carefully choreographed movement.  At the same Chhau can be said to be traditional as it has a quazi-religious status as it is performed during the Chaitra Parva ( March-April months of the year) and is calendared.  However it goes beyond the simplistic traditional mould as it is being increasingly being performed all over the globe which is unrelated to any ritual, religion or calendared time.

Chhau is thus in a constant state of flux and is always reinventing itself in variety of ways.  It cannot be denied that Chhau has its roots way back in time but at the same time to define it as being traditional, folk or classical as noted differently by scholars would simply reduce the innovation being by the presence of the females in this form. Chhau is traditional, yes, but it is as current as today as it was before.  It can be said as one having a “traditional process” as pointed out Brynjulf Alver.

By definition it is the process of tradition which creates, alters and renews, chooses and works in new topics in an endless chain, by the interaction between the individual bearer and the community. (Alver, 47)

Thus Chhau can be said to be a cultural process where individuals play an important role and in particular the female.   Therefore the agency of the female performer and her interconnections with the larger society and the process of Chhau has to be seen and understood .  As Elias puts it,

In order to understand and explain the civilizing process one needs to investigate…the transformation of both personality structure and the entire social structure. (Elias, 247, 1982)

Folk drama is said to often belong to the common and non literate people.  It is time to go beyond the ‘folk’ or the common and rethink about this dramatic form as an ongoing concern of contemporary life.   As in the words of Steve Tillis,

…folk drama might be present throughout a culture, employing of any social rank who use texts that might either be freshly composed or have a basis in literature, and whose performances are an ongoing concern of contemporary life. ( 35)

The categorization of Chhau as a pure folk form becomes even more problematic and complex as its performance techniques are difficult to master.  It requires years of rigorous discipline and training giving it a semi classical status that especially holds true for both Seraikela and Mayurbhanj Chhau.  It is commonly believed that folk drama belongs to peasant societies however in truth it cuts across boundaries of class and caste and constantly achieves new values.  According to Susmita Poddar, Chhau “arose from a certain ethnic aspirations and in its whole it is described with life struggle activities, totem taboo concept and beliefs of a certain ethnic group.” (16).  It would be incorrect to assume such simplistic positions as Chhau is a complex phenomenon involving many regions, namely Purulia, Seriakela and Mayurbhanj and is now assuming both national and international characteristics with the presence of performers such as Shagun Bhutani and Sharon Lowen.  It is thus not only ‘ethnic identity specific’ (Poddar) and truly is global.  It will be important here to note that I am choosing to concentrate only at the participation of females in both Seraikela and Mayurbhanj Chhau.

To understand any folk drama the ‘social context’ (Ben Amos) of the form has to be defined.  Here the “possession, representation and creation and recreation” ( Ben Amos, 5) of Chhau needs to be studied and understood.  The category of the form being truly folk is thus problematic as its recreation and representation has to be further seen in the wake of globalization and modernization.  Folk arts has to be seen in the wake of ‘commercial possibilities inherent in the new media ( Appadurai, 472).  One has to go beyond the folk mass category and see Chhau in the light of government support and declining traditional patronage.  Tradition thus appears in hybrids and transgresses limitations and boundaries (Schechner 2004:5).

Chhau as a folk tradition involves continuity of performance and has symbolic connections between the past and the present.  It no longer belongs  to ‘bounded or homogenous cultural groups or territories due to technological change and global capitalism ( Pallavi Chakraborthy, 178).  It is a part of the rich public culture of India or is the “ the public modernity y’ that is both contemporary and new. This performance can be described as a national culture that seeks to co-opt and redefine the local, regional and the folk cultural forms.  With the wake of commercialization, folk forms are now going beyond simple categories and are becoming much more complex in its nature of representation.  As correctly observed by Appadurai,

Commercial culture ( especially in the cinema, television and audio industry) seeks to popularize classical forms.  Mass cultural forms seek to co-opt folk idioms.  This zone of contestation and mutual cannibalization in which national, mass and folk provide both mill and grist for one another-is the very heart of public modernity in India. ( Appadurai and Breckenridge 1995:50)

Folk arts especially drama is seen as ‘little tradition’  as opposed to ‘great tradition’ that is popularly believed to be more sophisticated.   Great tradition is classified as representing high levels of intellectual and artistic achievements of the society.  Chhau is one such unique form of performance that has seen the participation of the royalty as performers.  In both Seraikela and Mayurbhanj Chhau we see the distinctive participation of the princes in this form.  It thus has had strong representation of the intelligentsia who have successfully transmitted to the form to generations.  Now with independence and the decline of the royalty and emergence of the middle class, Chhau exhibits fluidity and has thus developed ‘new traditions or invented traditions ( a term proposed by Eric Hobswan and Terence Ranger).  Chhau thus is one major form that moves beyond such definitions of being truly “folk” and is an ‘invented tradition’  that mediates between the sophisticated to the common.

Chhau is thus a local, national and international practice.  I hope to see Chhau as being embraced by middle class women becoming the site for emerging cultural identities inIndia.  This dance form can thus hope to become a space for women whereby they can achieve new meanings and their participation can hope to establish some kind of agency and create new potentialities for female performers.  It would be thus correct to conclude in the words of Wimal Dissanayake,

The recuperation of human agency then has both theoretical interests and practical political consequences of great import.  What is urgently needed is a theory of agency that recognizes that agents are shaped irreducibly by social and cultural discourses  and that they have the potentiality to clear cultural spaces from which they could act in accordance with their desires and intentionalities. ( 1996:xvi)

Thus this introduction of females in Chhau is indicative of transformed gender identity of Indian women as performers in the arts.  The participation of the females inChhau may be indicative of a new self worth, their own personal signification, and the public presentation of transformed gender identity for an Indian woman.  The Chhaufemale artists are reshaping their history by their participation in the performance. This participation is entrenched in the social life and spatial imagination of the artist.  The metaphorical space, of self-worth of the artist, helps the process of negotiation between the artist and her external spaces, her home, troupe members and community to occur.

Gouri Nilakantan Mehta holds a masters degree from Miami University and is currently persuing her Phd in theatre from the dept of Arts and Aesthetics at JNU Delhi. She has over 23 publications to her credit and has presented several papers at international conferences at Japan, Pakistan, Dubai and America. She was awarded the best graduate student award by Miami University. She has also directed over 12 plays and has produced more than 25. ABOUT GOURI Honest and straight forwardness is appreciated by me rather than a soft and gentle approach FAVOURITE QUOTES the only short cut between two points is a straight line