Manjit Bawa, The Legend, No More A Neice Reminicences by Dr. Seema Bawa 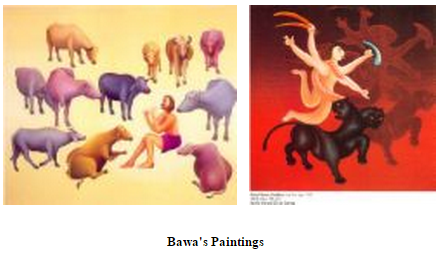 It is strange to be writing about Manjit Bawa in his death for as a policy I did not write on him and his art. I have always felt that I would not have a discerning perspective when it came to his art because I was so close to him, for Manjit Bawa was my uncle, my father’s younger and very dear brother.

We grew up in a joint family where he usually ate his dinner with us, and played games in the evening when we, that is my sister and I, were young. Later, he grew famous and successful and took on a larger than life persona. But for us, he always had a bit of hero because my grandmother made up for her inadequacy as a story teller by relating a serial on the Exploits and Adventures of Manjit at bed time. In all these he was engaged in acts of valour, strength and downright foolhardiness that froze my grandmother’s blood even years later. He never outgrew these traits and almost everyone reminisces about his great mental and physical strength. Perhaps that is the reason why we all clung to hope of his coming out of coma even after three years of the fateful stroke that struck him down on 17th December 2005. To see him lying comatose came as a great shock to me personally because my principal grouse was that he just could not be still and sit or stay in one place, except when he was playing chess or cards, games which I have known to last for days with very little sleep.

This restlessness however is rarely seen in work of his mature phase. There is a great deal of serenity and depth in his art. Often labeled a Sufi painter, he was that and much more. There is inclusiveness in his art derived from streams Indian tradition and philosophy which were decried by so-called avante garde artists and critics as being revivalist and pretty. He was inspired in part by the miniature tradition, especially the Pahari miniatures, but also by contemporary artists such as Krishan Khanna and J. Swaminathan.

He painted Krishna surrounded by cows but also dogs, because cherished divine melody could not be confined only to cows but is accessible to all. He painted acrobats and birds, and Lakshmi standing on a lotus in pink. He painted Ravi, his son, in a pensive mood. And he painted Narasimha killing the demon who was the primeval man himself. He painted his own personal and collective anguish against the devouring mobs of 1984 riots. He painted his Bharata with a lion and also Krishna and also the Devi. This iconographic eclecticism reflected the inclusiveness of his philosophy for his Krishna was his Ranjha.

Manjit Bawa was born in Dhuri in Punjab, probably in late summer of 1941 in a place known as the Goshala. His parents moved to Delhi soon after where he was to stay for most of his life. Here his elder brother, marking his entire lack of interest in studies and inordinate love for playing pranks started taking him to art lessons at Abani Sen’s studio with him. It is here that he developed a love for the arts and went onto study art at Delhi College of Art. At college he developed a strong friendship with Jagdish De, Umesh Verma and Gokul Deambi with whom, often under his brother’s guidance and company, he traveled all over north India. He and his elder brother took up a hotel in Dalhousie to be near the mountains and to have a running business while they pursued painting and writing. Much of his work was done in Dalhousie where he went to get away from the brouhaha of the art world.

For us he was an uncle full of laughter and mischief who flashed in and out of our lives. He sang at weddings and family get togethers. He hated my cooking and taught me how to cook a few things so that he could eat in my house. As children he would make clay toys with us and paint them in bright colours and take us to the Yamuna on his very ramshackle blue scooter. He was always good for a tenner for an extra horse ride in Dalhousie. He was an artistic genius for the world. For us he was a beloved uncle with whom we could and did argue, fight and pummel. We will all miss him for many reasons. May his soul find what it was searching for in life.