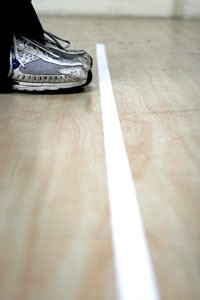 Forgotten lines, falling pants, flying props, ringing mobile phones… I am sure at least one of these has at one point of time, or the other, been the reason behind an interrupted act. But, saturday night at the India Habitat Centre, the performance of Israel Horovitz’s Line was interrupted by a protest.

A little insight, I believe, is necessary for some perspective.

Line is now in its 33rd year of continuous performance at 13th Street Repertory Theatre in New York and is the longest running ‘off-off Broadway’ production (Off-Off-Broadway refers to Non-Broadway theatrical productions of New York City in small theatres having fewer than 100 seats.

Its adaptation, directed by Mallika Taneja and Neel Chaudhuri, being performed by The First City Theatre Foundation at the India Habitat Centre was interrupted by some of the audience who walked out of the hall and forced the production team to stop the performance, following which the play was abruptly stopped. The “due tounavoidable circumstances…” routine was duly performed. The crew and the staff were as clueless as the audiences were, to the extent that nobody knew who necessitated the action and for what reason.

Apparently, it was “too much” and unacceptable to some. Sure, the dialogues were explicit and there was foul language in the play. No denying the fact. But, what exactly is expected from a play, the entry ticket for which clearly says that the entry is for adults only? A loud beep every time a four letter word is used? The naivety of treating Adults only, as blithely as Shake well before use is inexplicable.

I hope that our select group of audience who prodded me into writing this article read this and reflect on the following. The team did their job by specifying that the play was for adults. Neither did they intrude your comfort zone by beaming vulgar images on your television at primetime nor did they put obscene posters around the city. It was you who forced your opinion on them and a hundred other audiences by interrupting the performance.

Although, I am grateful for the fact, that there was no display of hooliganism. No slogans, no angry words were exchanged. Yet, it struck the same chord inside me. Is it true that we have become a nation of self-righteous people who have more opinions than information? Whatever little awareness we have, seems to be directed only at reinforcing our insecurities and not otherwise.

Well, all said and done, after fifteen minutes of chaos, confusion and refunding of tickets, the performance was continued due to the decisiveness of the rest of the audience and their support.

As far as the play is concerned, Line is a mirror to our flaws and provides food for thought. It is the story of five people waiting in a line. What is the line for and what are these people waiting for? These questions seem irrelevant when compared to what each of them does, to be the first in the line. In stark contrast to the unhurried initial minutes, the one act show leaves the audience and more so, the actors, breathless. The beauty of it lies in the fact that one detests these characters by the end. A fast and high energy show with absorbing sound effects and intelligent stage utilization is a memorable one breaking News.