Neena Gupta – Back in action in Desh (Manohar Khushalani)

Neena Gupta – Back in action in Desh 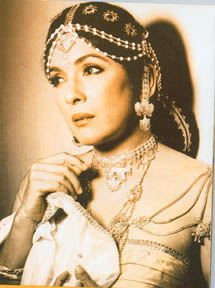 You wanna make a fast buck. Do it in theatre. If you think you can’t, well ask Neena Gupta. She was at NSD two years ago to teach the students how to. It all started when Neena met the NSD Director, Devendra Raj Ankur in Mumbai and complained that at NSD they were never told how to live off theatre. So Ankur asked her to undo that mistake and do a short workshop on how to make money in Theatre. I asked her if it was possible to make a buck in Theatre. “I am not sure if you can,” she admitted, “but at least I had thought about it. And I went to NSD to share my experiences with the students.” Always blunt and straight forward, a quality which came in handy when she had to keep a poker face in Star TV’s Kamzor Kari Kaun. The first time I met Neena Gupta was in late seventies, a thin wiry girl who had just finished her PhD in Sanskrit and was raring to go into theatre. We worked together in dramatising the late Raghuvir Sahay’s poetry at India International Centre.

Our other co-actors were Manohar Singh and Hema Sahay. The production was called Images and was directed by the late Sonu Krishen. Raghuvir Sahay was there too to correct our diction. As I moved on to work briefly with Jalabala Vaidya on India’s first ever TV lampoon show, Neena followed out of curiosity, but lost interest within a day. That was her nature, adventurous, but impatient. Neena tried various things: she worked with Ruchika theatre group and acted in a play directed by Arun Kuckreja. Then she joined the NSD, and graduated from there as an actress. I bumped next into Neena Gupta as my co-student at the FTII film appreciation course in Pune. We had an opportunity to watch Gupta act in a film because Shyam Benegal had brought a print ofMandi for the students. It is at Pune that I saw a change in her attitude towards Cinema. Having seen so much of good Indian and Foreign films, courtesy Satish Bahadur of the FTII and Nair of the Indian Film Archives, Neena decided to do only serious work. And sure enough her media personality transformed, as one was to see later. Even critics started taking her seriously. Her television serial Saans was a big success and won her many acccolades. “I produced Saans because I wanted to do something that a woman of my age could play a lead in,” she explains, “I tried to show that even at an age of 30-35 a woman can be alive and kicking.” According to her, even though a woman is tied down as a housewife at that age, she is freer because her children are grown up and she can really freak out. She attributes the runaway success of that TV soap to good team work.What really took people by surprise was when she was booked as an Anchor in the high profile Kamzor Kari Kaun. It put her straight into big league, for the game show was supposed to fill the vacuum created by the departure of Kaun Banega Crorepati. Even though the serial did not do too well in the TRP ratings, Gupta gave a rather good performance of the stern anchor who melted only occasionally.

Some time back it had appeared that Neena was bored with Mumbai and wanted to return to Delhi. She had also signaled her return to theatre by forming a theatre group Sahaj with Rajendra Gupta. Their first play, Surendra Verma’s Soorya Ki Pehli Kiran Se Surya Ki Antim Kiran Tak, was premiered at the Bharat Rang Mahotsav last year. This play dealt with an ancient tradition calledNiyog, according to which, if a King was impotent, the Queen had to spend one night with any man of her own choice, so that she can produce an heir apparent to the throne. The State Laws, which enforced such extreme measures on the Kings and Queens, had their own logic. It was to ensure that the future King had his mother’s blood in him. All the five Pandavas too were borne out ofNiyog. The play dealt with the conflict arising out of a woman experiencing sexual fulfillment, hitherto denied to her. The play was invited to Dubai and was a grand success, so much so that she has received an invitation to do a workshop in Pakistan. However now it appears that Neena’s boredom with Mumbai is over. Recently the serial Saans was being  repeated on one of the channels giving Neena some much needed visibility. She has also made a big comeback in the TV serial Desh Mein Nikla Hoga Chand