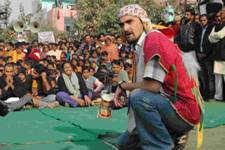 who’s afraid of the documentary film

Remember the cynical manoeuvring by which the Film Federation of India had, some years ago, denied entry to video documentaries in their festival? And how this had brought home the threat that this medium can pose to vested interests? After initially denying space to video films in its international film festivals, ostensibly because these were ‘in a different format’, the Federation had inserted a censorship clause for all Indian entries to the festival. The row that ensued had been extensively reported in the media, so a bald re-iteration should do for now. Film-makers had come together to form an organisation named VIKALP with the aim pf safeguarding the rights of documentary film-makers. Launching a Campaign Against Censorship (CAC), they had run a widely attended ‘Films for Freedom’ programme of screenings and discussions at educational institutes.

This proactive initiative has had an interesting spin-off. It has placed the agenda of activism and its methods on the front-burner for a generation that is often written off as a self-absorbed ‘I’ rather than a ‘why’ generation. (By the way, what is this generation’s current alphabetic habitation? Is it still Generation Y, or is it now staging its last stand as Gen-Z?) The video documentary has, as a result, been so comfortably privileged as the conscience keeper of the nation that I’m tempted to play the devil’s advocate and ask if theatre isn’t a better mode of communication through which activist agendas can be carried out. However, before outlining crucial differences between the video documentary and theatre, let’s identify some strengths that both share.

The video documentary and theatre performance have, unfortunately, often been disparagingly prized as no more than a handmaiden to other activisms — as techniques by which grass-root actions extend or advertise their interventions. Such a view has treated video and theatre as little more than a courier service, as blandly variable vehicles of a relentless messaging. Put another way, the medium has been equated with its message; and has therefore been valued, from its aims to its achievements, for the literal directness of its effort. NGOs have been particularly susceptible to this lure of social advertising, perhaps in the belief that generating the same message through a variety of formats extends its effectiveness, even though all it really does is relieve the tedium. If Doordarshan was obsessed years ago with televised puppet theatre as its favoured mode of disseminating advice to farmers and pregnant women, it’s the NGOs’ turn now to patronise street theatre with a similarly deprecatory optimism.

Why puppet theatre and street theatre is anybody’s guess. I don’t think the social sector’s preference for these two forms is based on any insight into their potential. Rather, these forms are trivialised when used as a platter for pre-digested data and handed-down attitudes, as a dressing-up that goes hand in hand with a dumbing-down. Obviously, state television and the NGO sector rate the urban proscenium stage as the ‘true’ theatre, and puppet theatre or street theatre as cute country cousins suitable for rustic and other under-developed tastes. (Not that its performers have seemed to mind: in a shrinking market, even wrong attention is welcome as preferable to none.)

Yet, it must be pointed out that there is a faint glimmer of wisdom in the social sector’s choice of theatre and documentary film for carrying out its activist agendas. This wisdom is hinged on two features common to all performance: greater accessibility, and the affective power of story-telling. Performative cultural modes are accessible to audiences in a special way because they circumvent the barriers of literacy and the drudgery of reading. Such accessibility is then magnified through the affective power of stories that theatre and film usually place at their centre. To the extent that the theatre and the documentary film tell stories, they can never be reduced to mere data transcription codes. It is immaterial whether their stories are real or fictional, or whether these are particular instances or typical cases, because performative modes that tell stories irradiate even simple statements with a penumbra that deepens, authenticates and often problematises the business of a literal messaging. Clearly, the potential of theatre and film for activist causes remains unrealizable if these are used merely to sugar-coat mundane fare.

It is when we define accessibility in physical terms that differences crop up in the respective potential of film and theatre as activist space. Film is unrivalled in its ability to reach out to vast numbers of people. There is no gainsaying the seduction of spread: if maximising contact with people is vital to the activist impulse, the medium that reaches out more effortlessly will obviously be regarded as the more enabling one. In contrast, theatre performances exist in the singular and have to be re-constituted afresh for each act of viewing. Not only does this call for much more forward planning, it also implies that there can be no guarantee that later shows will work exactly like the earlier ones. Films, on the other hand, travel to venues more rapidly than do theatre troupes and offer an assurance of stable replication (every spectator gets to see exactly the same thing as created by its crew, give or take some transmission loss on account of projection equipment).

Of course, problems of technology and finance do cramp film-makers, sometimes so severely that I think ‘accessibility’ should be defined not just in terms of audience comprehension and taste, but also in terms of the artist’s access to the tools of her art. However, recent developments in video technology have ensured that these twin pressures are less burdensome to today’s film-maker — high-end digital cameras have become cheap enough for independent film makers to acquire their own hardware; sophisticated editing software, faster computer processors and capacious storage disks now enable footage to be processed at home. The result: a fresh impetus to the documentary film movement which is evident in the range and number of films being made today.

It is interesting to note that if this celebration of accessible technology and reduced expenditure were to be taken to a logical conclusion, it is theatre rather than the video film that would shine in an advantageous light. It’s cheaper to make plays than films, and it’s possible to make them without recourse to equipment of any kind other than the human body. Most theatre performances can be designed without technological fuss in a way that even the barest film cannot. Such a theatre gains a quality of outreach that far outstrips the reach of film. For, what technology can ever hope to compete with the affordability and the portability of the body and the voice? Sure, this isn’t true of all theatre productions. But I would argue that productions which depend on technological assists for their effects (take, for instance, the romance with projected images that most plays glory in nowadays) end up shackling themselves in ways that erase their fundamental nature. I say this fully aware that some of us believe that the facility which technology brings in some ways is well worth the price that has to be paid in others.

Take another difference between film and theatre. Films possess a huge advantage in terms of authenticity in reportage. They have no peer if the business of activism is to disseminate images and narratives of actuality, to show things as they actually are. But, if the primary purpose of activism is to persuade and engage with people, then the advantage that film enjoys over theatre is considerably neutralised. The very attractions of the film medium – stability, replication, transportability – become limitations from this point of view.

It is a truism worth repeating that the uniqueness of theatre performance is that it is a live event. People come together at a particular time, to a particular place, for a transaction where some people show things to others who watch. In film, there is no equivalent scope for interaction and therefore no lively relation between actor and spectator. The idea of a collective spectatorship – where the audience becomes a prototypical community – is of course common to both film and theatre. But, in the latter, this ‘community’ includes the actor as well. It is not just the audience that watches the actor, but the actor too who ‘reads’ his audience and subtly alters his performance accordingly., Interaction, engagement and persuasion between the performers and audience is so central to theatre that it is often the richest source of dialogue in the performance event.

Where, pray, is any of this possible during a film screening? The film spectator remains more or less a passive recipient of a fixed structure. The film may well ‘play’ with the spectator’s responses, but even such playing is welded to a grid that is frozen unalterably on videotape or celluloid. Interactions in the theatre between performer and spectator are, in contrast, dynamically dependent on the particulars of that performance. In other words, the fragile instability of theatrical performance becomes a powerful opportunity for an activist intervention, as is evident in the way Augusto Boal has actors interrupt the performance and address audiences directly in his Theatre of the Oppressed. Techniques used in Theatre-in-Education methodologies (‘Hot-seating’, for instance, where spectators talk back to ‘characters’ in the play and offer their comments) is another case in point.

As I said, where, pray, is any of this possible with film?