The Owl and the Pussy Cat

The Owl and the Pussy Cat
A review
by
Seema Bawa 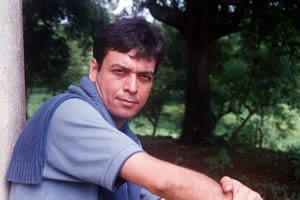 Thrown together in a low-rent bachelor’s flat instead of a ‘pea-green boat’, the odd couple in this highly amusing Bill Manhoff comedy, is certainly not at sea! ‘The Owl’, Felix played by Kumud Misra, a highly accomplished actor, is a self-styled intellectual author – while ‘the Pussycat’ played by Kanika Dang, is a wannabe actress and model – however, to pay the bills she entertains gentleman callers, a prostitute but not promiscuous.

Having noticed the stream of gentlemen caller at her apartment through his binoculars, the peeping owl does his ‘civic’ duty by informing the superintendent of the building. The pussycat with nowhere to spend the night seeks revenge by imposing on the owl for a bed. And then, through a battle of wits, words, and wisdoms they both start to ‘educate’ each other as well as the audience in ways they never knew they could.

The current production by Dotted Line Productions has wisely kept it simple and has not endeavored to create convoluted and over intellectualized caricatures of the protagonists. The director, Satyajit Sharma, an NSD Alumni with several outstanding acting and directorial performances to his credit, takes two great actors who handle some good old fashioned repartee rather well; coupled with adept handling of a witty script to put together an eminently watchable show.

The play focuses on two people who get to know each other, have sex, and eventually fall in love. As in most romantic comedies, one-liners abound and the protagonists are shown falling from their own self constructed identities. The fight in Felix’s apartment after Doris barges in at the beginning is hilarious. She gets upset by his use of big words, but eventually buys her own guide to extending one’s vocabulary. He is horrified by her “filthy” animal existence exemplified in his use of words like gutter slime and filth for her, but delights in the new experiences she has to offer. The two show each other new ways of looking at things and which is why Doris and Felix’s chemistry works for the audience. It’s is akin to what happens in real life. Their romance is played for laughs, but it’s also sweet and touching. Felix, like most men, has to have a near nervous breakdown before deciding Doris is the one for him through a bitter-sweet dream sequence that evokes meta-theatre. As each displays their softer selves, the audience realizes they have more in common than they think. The two are in transition; looking for that obscure goal of success; he in writing, she in acting. This shared ground draws them together and reflects to the audience a very real struggle that we all experience in relationships.

Odd couples, whether of the same or different sexes have been a comedy formula for decades. The play enthralls with its at times salty language. Most importantly, Kumud and Kanika have a very definite chemistry. Though Kanika’s is better delineated and in intrinsically is the more outrageous and attractive character (being the underdog) in the script, it does not steal the focus. Kumud interprets the inherent wimpy-ness and prissyness of the character with a paradoxical male strength and libido. This makes for a powerful performance that converts the essentially mono-dimensionality of the character into a rather complex and conflicted one. The interlude when the wimpy Felix transforms briefly to a randy ‘baby’ is remarkably executed with Kumud performing from each pore of his being.  Kanika has put in a lot of effort into building her character but while she is able to bring to fore the tartness of Doris, the vulnerability written into the character does not come out as well as it may have. Though this prostitute has a heart and it shows.  While the play per se is not deep enough to allow for great acting, it does give scope to the two protagonists to demonstrate impressive technical finesse; the director who is apparently debuting for the group needs to be complemented for this.

In order to be memorable theater, the discovery by Felix and Doris that they are good for each other need  not be revelatory in the vein of a metaphysical revelation, but should be funny. The director and his cast achieve this with ease. The humor in “The Owl and The Pussycat,” depends largely on sarcasm, insult and the sort of logic that has Doris announce: “I may be a prostitute, but I’m not promiscuous.” A lot of the humor of the play depends on language and the “play” thereon. Much is made of the fact that Doris doesn’t understand words like despicable, aesthetic, assimilate and intrinsic while Felix who seeks to define himself through words or concepts finds them completely incapable of addressing his feelings for Doris. A comedy based largely on language and timing is always a difficult ask and the current production delivers in aces.

Directorial skill is amply demonstrated in terms of technique, stage craft and spatial usage. The fundamentals of good stagecraft such as blocking, body language and use of space have a refreshing rehearsed certainty and professionalism fast disappearing from current productions.  Interludes of well chosen music pieces and the intermittent use of gaps during the play deserve to be commended. This despite the somewhat inadequate lighting arrangement around the proscenium of the LTG auditorium