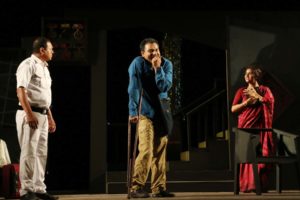 The Play
Nirupam Goswami, an ex-army man, who has now become an entrepreneur, is living a contented life with his wife Sujata Goswami and son Debopam Goswami, when one afternoonall of a sudden, there appears a stranger,and intruding into their house claims to be the real Nirupam Goswami, who had fought as a Major in the Dras Sector, 237 battalion, during the Kargil War. He claims that Sujata is his wife, and says that this Nirupam Goswami is actually Mainak Ghosh, who had fought under his domination in the Kargil War. Surprised and astonished by the attitude of the ‘uninvited guest’, Nirupam and Sujata struggle to fight against all odds. The case is then taken to the police, who is also taken aback, when the stranger presents proof after proof. Lawyers from both the sides look into the matter, and finally, the case reaches the court.

Director’s Note
I feel every director wants to work on a play that goes beyond its words and delves into a deeper philosophy of life. Anahuta (The Uninvited) compelled me to look within me while presenting it on the stage. The known tactics of executing plays went topsy-turvy while working on Anahuta. The more I faced these challenges the more I felt zealous about it. Not only was it me but the actors too went through all these challenges while playing their parts. In fact, the different selves that inhabit our being remain, for the most part of our lives, unknown, unrecognized and uninvited to the fore. When these selves come to the fore and confront us, the familiarity with life vanishes instantly. Everything legal and illegal, true and false, the victorious and the defeated, stand on an unstable ground.Here, in this play, we too have faced something unknown and been on a journey with it. That the journey of life is the only truth is what our team has tried to present through this play on stage.

The Director
Sima Mukhopadhyay (born 5 December 1959) is a director, playwright and actor from Kolkata. She made her stage debut as a child artiste with M.G. Enterprise, a professional theatre ensemble. She received Master’s Degree in Drama (Acting) from Rabindra Bharati University in 1985. At present she heads Rangroop. As an actress Sima has acted in productions directed by eminent directors, beside her own. She has written twelve full-length plays, and six short-length plays for children. Besides the ones written by her,Sima has directed works of Rabindranath Tagore, Oscar Wilde, TriptiMitra, Arthur Arbuzov, and many other world renowned writers. She is a recipient of Senior Fellowship from HRD Ministry for the year 2002, Ritwik Ghatak Smriti Puraskar, Paschim Banga Natya Akademi award, Dishari Puraskar, Kalakar Award, Bengal Shrachi Award, and Anukul Samman.

The Playwright
Dr.Snehasis Bhattacharyya, started his journey as a playwright with Swapnoparosh which was staged by Natyaranga theatre group in 2011. After that, he was selected in the International Playwrights’ Workshop held the same year with the playwrights of West Bengal and Bangladesh, andthe Cultural Ministry of India. He is also an actor and has performed many plays for Bangla theatre.

The Group
Samstab was formed in 1982 under guidance of Guru Sri Dwijen Bandyopadhyay. Its first production was Abhimukh, a poetic play written by Shri Navendu Sen and staged in 1983. The group has tried to encourage new, and not-too-well-known playwrights too. With Naak, Kalpomon and Dhuni Stambha, we introduced a new author Kajal Sengupta and also produced Sokratiser Jabanbandi by Dr. Sisir Kumar Das, which was later telecast through Kolkata Doordarshan.