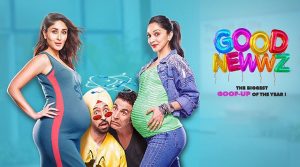 Good Newwz is a light-hearted comic escapade with Akshay Kumar- Kareena Kapoor and Diljit Dosanjh-Kiara Advani as two sets of married couples trying to have a baby through IVF (in vitro-fertilization).  The two couples, from opposite ends of the cultural spectrum, have their fates entangled through the ovaries of two wannabe-moms and their shared family name: Batra. Though simplistic, the film’s quota of things between human forte and foible makes it relatable in places.

Akshay and Kareena as Varun and Dipti Batra, are a high-flying swish couple in Mumbai, who after failed attempts at parenthood are advised by family to visit an expensive fertility clinic. Enter Honey (Diljit Dosanjh) and Monika (Kiara Advani) from Chandigarh. After some mis-conceptions, and literal ones, they too land up in Mumbai in the same IVF centre, hoping to go back with Good Newwz.  They bring with them their clichéd, but endearing Punjabi earthiness from the land of “pinnies made by mom.”

The fertility clinic is run by another doctor- couple, ably played by Adil Hussian and Tisca Chopra, who claim a high rate of Good Newwz emanating from their centre. Voila! Both the women are successfully impregnated at the IVF clinic. But their joy has a short run as they are informed by the poker-faced doctor that the sperms of the two males got exchanged with the wrong wives. The goof-up is because of their shared family name. Now begins the rollicking comedy of errors.

Akshay Kumar is refreshing in this comedy after a spate of social-messaging roles. His comedy timing is spot on. Middle-aged executive in a car selling company, Akshay as Varun Batra has a trying time when his journalist wife Dipti is crazy to catch her ovulating time to conceive. He comes across as a caring, sometimes detached husband who is baffled at the need to have a baby to perpetuate genes.

The film deals with a topical issue of IVF babies, though it is only secondary to the story. At one point Akshay even comments that it is an interesting time when parents can just sit back at home and get a baby from an IVF centre. Debutante director Raj Mehta and co-writer Jyoti Kapoor have come up with racy humor, it being best as a comedy without getting pedantic about any issue. While grazing on the bigger issue of stressful lifestyle being a hurdle in normal conception, as also the social pressure to produce babies, the film keeps you engaged in the confusion of the two couples with exchanged sperms, or ‘spams’ as referred to by the simple Honey from Chandigarh.  You wonder along with them how the conundrum will be resolved.

The content of the film is not as vital as the way it is narrated that makes Good Newwz eminently watchable. A laughter-riot, the film is risqué but never teeters on the offensive. The pace is maintained till the end, as is expected from a film co-produced by Karan Johar.  I would certainly recommend it to all looking for some good humour – a rarity in Bollywood films. Good Newwz, the last Bollywood film to be released in 2019, was a befitting au revoir to the last year and continued laughter in the new.