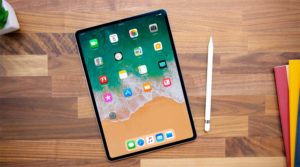 Apple released two very interesting tablets last year, that could be one of the best tablets ever made. With its all-new design, edge to edge display, Face ID, 4 speakers, USB type C Port it packs quite a lot of features. From specs, impression and design. Here’s everything you need to know about the iPad Pro 2018 model.

Since its release, the iPad has looked pretty much the same. However, I am glad that 2018 was the year of change for the iPad for its biggest makeover yet. Following the design of the iPhone X, the iPad no longer features a physical home button nor a 3.5 mm headphone jack. This was indeed replaced by a seamless liquid retina edge to edge display which in my opinion looks much better. This also makes the previous generations iPad look outdated in terms of design. Though the bezels aren’t overly small this gives you a little bit extra room to hold the tablet without touching the screen accidentally. The iPad Pro also comes in 2 sizes (11 and 12.9 inches) along with 2 beautiful variants – silver and space grey.

The iPad Pro features a 264ppi “Liquid Retina Display”, which quoting from apple, allows the screen to “follow the curves of the device, while a new backlight design allows the display to extend into the corners.”. Moreover, the iPad also packs in apple’s ProMotion display allowing a refresh rate of up to 120 Hz, thus allowing gamers and designers to experience a much faster refresh rate while using iPad Pro. At the same time, the viewing angles are also very wide and colour reproduction is excellent. Overall the edge to edge display is outstanding and accounts for much better user experience.

On the backside, the iPad pro has a 12 MP camera (which I find slightly more protruding ) whereas there is a 7MP true depth camera on the front. Though I think the back camera in comparison, gained only minor improvements, retaining the same 12 megapixels as the previous generations iPads. Apart from that the camera is equipped with Smart HDR and is also capable of recording 4K video at up to 60fps which is double the frame rate from last year.

Powered by A12X bionic chip and a 7-core GPU, the graphics performance of the iPad Pro has been 2x than the last year’s iPad. The iPad Pro also comes with Face ID which Apple says is more fast and secure than the Touch ID used in its predecessors model. Moreover, the Face ID is also capable of recognizing the face in both portrait and landscape mode which I find pretty handy. Furthermore, the introduction of USB type C which allows iPad Pro to connect to an external monitor, transfer images from memory cards into Photos, use a wired keyboard or even connect to an Ethernet network. As for audio, the new iPad Pro models come with a four-speaker setup that houses two woofers and two tweeters offering wider stereo sound.

Overall, all the aspects of the 2018 iPad pro are pretty good. Liquid Retina display, 120 Hz refresh rate, the cameras, Face ID, Stereo Speakers all makes it one of the best tablet out there. Though the only downside is its pricing which as mentioned earlier crosses the ₹ 1 Lakh + mark thus making it accessible to only people with a high-end budget.