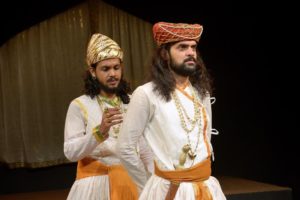 Raktbeej is an adaptation of a famous Marathi play, Ithe Oshalala Mrutyu. It tells a story about war between two of the most powerful empires in 17thcentury, that of Marathas led by Chatrapati Sambhaji and Mughals by Alamgir Aurangzeb. The play has a complex web of characters including Yesubai the dutiful wife and queen, Kavi Kalash an ardent friend, Ganoji Shirke the devious sardar but a loving and doting brother of Yesubai and Asad Khan the devoted and loyal uncle of Aurangzeb. The play draws upon a mental canvas of conflicts between both Sambhaji and Aurangzeb as Kings fighting contradictions in personal and political battlefields.

I wanted to explore the relevance of history in our contemporary socio – political scenarios. This play is not just a representation of a historic event, but dwells deep into complex psychological realities of those characters vividly. Although at a glance it seems like a historical narrative – of two kings and their kingdoms but its personages enact a complex web of human behavior.
Raktbeej is a story that explores varied perspectives of human personas than those just as – larger – than – life characters recorded in the annals of history. It also draws multiple facets of their natures and varied shades of their character. I approached the play through this dual purpose of having stood by an authentic historical narrative while exploring its nuance and niche.

Pooja Vedvikhyat is a Performer, Director and Designer who places her work in new spirit of emerging theater and relates it to contemporary issues. She graduated from National School of Drama 2018 while completing a course from DUENDE School of Ensemble Physical Theater under the guidance of director, John Britton. She directs plays of varied nature and flavor like: Kus Badaltana and Andher Nagri Chaupat Raja. Her forte is history and family dramas.

Vasant Shankar Kanetkar (20 March 1920 – 31 January 2000) was a Marathi playwright and novelist. He was born in the town of Rahimatpur in Satara district, Maharashtra, India.
After passing M.A. exam in 1948 from Sangli, he joined as lecturer in Nashik in 1950. He received wide acclaim from audiences for his play, Raigadala Jewha Jag Yete and continued writing several successful renderings for the stage. He kept the Marathi commercial theatre vibrant and alive for more than two decades with several successful stage renderings. His best five plays received awards of the year by Maharashtra State Government.

This play is being presented as a part of National School of Drama’s graduate showcase (class of 2018), which aims to provide a platform for emerging theatre practitioners, allowing them to share their work with a wider audience.