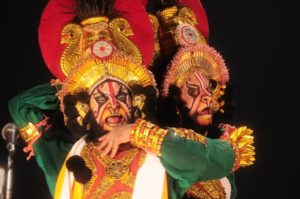 The Play
Vaali Moksha describes the incidents leading to the revelation and death of Vaali, the king of ‘Vaanaras’ or the tribe of the apes. The alliance between Rama and Sugreeva that happens here becomes a crucial point for the later happenings in the Ramayana.

Director’s Note
This episode is selected from the Aranya Khanda of the Ramayana composed by Parthi Subba, a 16th century Yakshagana playwright. This play has an interesting conflict between two communities, viz human and semi-human/ape like. Traditionally, this play was limited to the dialogue/conversation/ vaachika based Taalamaddale. I have tried exploring the new interpretations and possibilities of already existing traditional theatre elements, music and rhythm which helped in enhancing the portrayal of characters and the story, using choreography to create a spectacle. Here one can see a spectrum of moods (other than the main-stream popular depiction of Veera, Bhayanak, Hasya) including Love (Shringara), Sorrow (Karuna), Wondor (Adbhuta) and Tranquility (Shanta). It is an effort to reach new audience, breaking the barriers of language through simple narration and direction, without losing the framework of impromptu dialogue delivery, dance and narrative motives of Yakshagana. A short and powerful presentation of the story within the limited performance time has made this play successful in and abroad India. To conclude in a nutshell, even though direction of this play was a challenge, I found it as an artistic opportunity.

The Director
Sri Keremane Shivanand Hegde is the present director of this Yakshagana Troupe. He is also Guru and Director of a Yakshagana Training Center – “Srimaya Yakshagana Ranga Shikshana Kendra” at a remote village of Coastal Karnataka. Shri Hegde is a fifth generation Yakshagana artist in Keremane family. He has studied and practiced many classical and folk dance forms apart from Yakshagana and has toured all over the globe heading the Yakshagana Mandali. He has been conferred with many awards (Aryabhata International Award, Kuvempu Deepa Award, Ajithashri, Kusumashri, Chittani Awards etc.) and titles (Yaksha Sarathi, Nritya Param etc.). Currently, he is Academic Council Member of Karnataka State Dr. Gangubhai Hangal Music and Performing Arts University, Mysore and Member of Executive Board and The Chairman of Folk and Tribal Community of Sangeet Natak Academy.

The Playwright
Yakshagana poet Parthi Subba, believed to have lived in about 1600AD, is a celebrated composer of many Yakshagana Prasangas (or poetic episodes). Subba is believed to be the originator of new regional style, the Tenkutittu, the ‘Southern School’ of Yakshagana. He is also believed to be the author (probably the compiler and editor) of Sabhalakshana, a collection of songs used for the preliminary (Purva Ranga) of Yakshagana. Himself a Bhaagwatha and an actor, Subba widely travelled. His Ramayana is being used all over Karnataka by the traditional theatre by all styles of Bayalata.

The Group
Yakshagana is a rare 500 year old operative art form which belongs to our rich Indian heritage originating in Karnataka. It is a combination of dance, drama, music, dialogues and stories taken from Indian epics and mythology. Sri Idagunji Mahaganapati Yakshagana Mandali, Keremane® was established in 1934 by my grandfather Shri Keremane Shivarama Hegde. This Mandali is a non-profit NGO, and the performing unit of our organization has toured extensively in India and abroad i.e. USA, England, Spain, Bahrain, France, China etc. Many awards and recognitions have been conferred to the Mandali from all over the world, the prestigious ‘Raja Mansingh Tomar Award’ conferred by MP Govt. being the most recent i.e. last year.