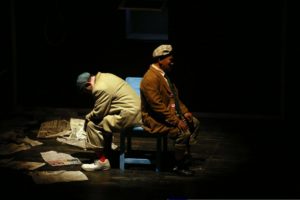 Two hit-men, Abo and Tomba, are waiting in a basement room for their assignment. As the play begins, Abo, the senior member of the team, is reading a newspaper, and Tomba, the junior member, is tying his shoes. Tomba asks Abo many questions as he gets ready for their job and tries to make tea. They argue over the semantics of “light the kettle” and “put on the kettle”. Abo continues reading his paper for most of the time, occasionally reading excerpts of it to Tomba. Abo gets increasingly animated, and Tomba’s questions become more pointed, at times nearly nonsensical. In the back of the room is a dumbwaiter, who delivers occasional food orders. This is mysterious and both characters seem to be puzzled why these orders keep coming; the basement is clearly not outfitted as a restaurant kitchen. Tomba goes to the bathroom. Abo listens carefully—we gather from his replies that their victim has arrived and is on his way to the room. Abo shouts for Tomba, who is still out of the room. The door, that the target is supposed to enter from, flies open. Abo rounds on it with his gun, and Tomba enters, stripped of his jacket, waistcoat, tie and gun. There is a long silence as the two stare at each other before the curtain comes down.

The play is an expression of absurdity of life portraying the psychological contrast in human behaviour and analysis of inner truth and freedom.

Thawai Thiyam was born in Imphal on 15 August 1982. He received training in Dramatics and Performing Arts at the Chorus Repertory Theatre, Imphal. This included stagecraft, design, martial arts, direction etc. Because of his passion for theatre-arts he joined the prestigious Institute of Calcutta Puppet Theatre, Kolkata to study theatre design, theatre architecture, scenic design, property and mask making, and a section of puppetry and performance under the able guidance of Padmashree Suresh Dutta. He has participated in quite a number of major national and international theatre festival held in India and abroad. Thawai Thiyam has directed many plays in his debut including Bachae, Shaknaidaba Waree, Maharaj Indrajit, Rajya Abhishek, Punaragomon, Andha Yug, and The Dumb Waiter.

Harold Pinter (10 October 1930 – 24 December 2008) was a Nobel Prize-winning British playwright, screenwriter, director and actor. One of the most influential modern British dramatists, his writing career spanned more than 50 years. His best-known plays include The Birthday Party (1957), The Homecoming (1964), and Betrayal (1978), each of which he adapted for the screen. His screenplay adaptations of others’ works include The Servant (1963), The Go-Between (1971), The French Lieutenant’s Woman (1981), The Trial (1993), and Sleuth (2007). He also directed and acted in radio, stage, television, and film productions of his own and others’ works.

The Chorus Repertory Theatre was established in the valley of Manipur, a small hill state in the easternmost part of India, in April 1976 under the able and dynamic guidance of Ratan Thiyam. Located on the outskirts of Imphal, Manipur’s capital city, Chorus Repertory Theatre’s two acre campus has been slowly built (and six times rebuilt after disastrous monsoons) to accommodate a self-sufficient way of life with housing and working quarters for the company. It is now an important regional and national centre for contemporary theatre.  On its 25th anniversary, the company dedicated its first permanent theatre called ‘The Shrine’, a 200 seat auditorium conceived and designed by Ratan Thiyam with space for set construction and storage.