THE HOUSE OF USHER by Edgar Allan Poe 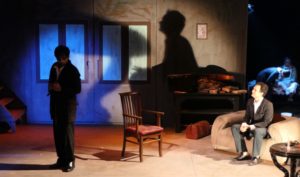 An unnamed protagonist (the Narrator) is summoned to a remote mansion of his boyhood friend, Roderick Usher. Filled with a sense of dread by the sight of the house itself, the Narrator reunites with his old companion, who is suffering from a strange mental illness and whose sister Madeline is near death due to a mysterious disease. The Narrator provides company to Usher while he paints and plays guitar, spending all his days inside, avoiding the sunlight and obsessing over the sentience of the non-living. When Madeline dies, Usher decides to bury her temporarily in one of his house’s large vaults. A few days later, however, she emerges from her provisional tomb, killing her brother while the Narrator flees for his life. The House of Usher splits apart and collapses, wiping away the last remnants of the ancient family.

I have looked at this story as that of a man living with a peculiar psychological state. The house of Usher, the pond, the tree, and everything inside the house, is symbolic of the inmates and their inner struggles. There are many personalities dwelling in the mind of the protagonist. He finds himself psychologically unwell, and to cure himself creates another personality within him to help him come out of this problem. I have tried to present this story as per my interpretation and as per my search.

Born and brought up in Arunachal Pradesh, Goge has completed her graduation from Donyi Polo Government College, Kamki with Masters in Hindi. She attended a 45-day workshop by Riken Ngomle (NSD graduate) organised by National School of Drama in 2013. She completed her One Year Residential Certificate Course in Dramatic Arts from NSD, STTC in the year 2014.  Then she graduated from National School of Drama with specialization in Design and Direction in 2017. She has been actively working on the Folk Tales of Arunachal Pradesh with Riken Ngomle and Tai Tugung.

American writer, poet and critic, Edgar Allan Poe is famous for his tales and poems of horror and mystery, including The Fall of the House of Usher, The Tell-Tale Heart and The Raven. Poe’s work as an editor, a poet, and a critic had a profound impact on American and international literature. His stories mark him as one of the originators of both horror and detective fiction. Many anthologies credit him as the “architect” of the modern short story. He was also one of the first critics to focus primarily on the effect of style and structure in a literary work; as such, he has been seen as a forerunner to the “art for art’s sake” movement. French Symbolists such as Mallarmé and Rimbaud claimed him as a literary precursor. Baudelaire spent nearly fourteen years translating Poe into French. Today, Poe is remembered as one of the first American writers to become a major figure in world literature.