Epic play about women and war 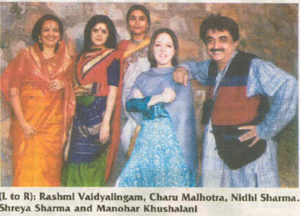 The play “Kurukshetra and After” is a powerful and vivid portrayal on the theme of women and war. It addresses the impact that war has on the lives of women and their struggle to come to terms with its aftermath. It is being presented for Delhi Tourism by “Stage Buzz” a new Theatre Group with a progressive outlook, on December I I and 12 at SRC auditorium, Mandi House.

As December 12 is Delhi Tourism day, the show is likely to be graced by Delhi Chief Minister Sheila Dikshit. The play is being directed by the well known Theatre Actor/Director and Critic, Manohar Khushalani.

As a member of Theatre Union, Khushalani had taken up major social issues such as dowry, bride burning, Sati and drugs as themes of street plays.

Dario Fo’s ‘Accidental Death of an Anarchist’ and ‘Can’t Pay Won’t Pay’, both directed by Manohar Khushalani, received rave notices from critics and audiences alike. An all women play, Kurukshetra and After, has been written by Suryakanthi Tripathi who is the Director General of the Indian Council for Cultural Relations. It has five women characters played by experienced actresses – Rashmi Vaidyalingam Charu Malhotra,

Ruchita Puri, Nidhi Sharma and Shreya Sharma, each of them brings to her role both the poignancy and the innate courage of the characters that they portray. While it is based on the aftermath of the Kurukshetra war in the Mahabharata, it deals with the impact of war on women, and has powerful social relevance in the diverse situations that women find themselves in even today.

The script has a powerful poetic format that lends itself to a contemporary rendition yet retaining the epic proportions of a classical genre.

The theme is highlighted through a powerful script based on the experience of women, both royal and common, who suffer devastating losses in Kurukshetra, the great battle of the Indian epic “The Mahabharata”. The issues that confronted those women have remarkable contemporary relevance, and are strikingly similar to those that challenge the women of today, The closing and the opening chorus provide the historical and the contemporary contexts to the play, and serve to bring the moral issues of war, the relationship between the ruler and the ruled, and the role of women into sharp focus.