Staring in the Subway

A Chilling Short Story from London

Staring in the Subway
by
Manasvi Gautam 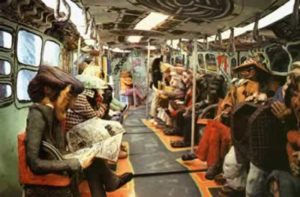 A woman had been through a long and hard day at the office and was coming back home in the late evening. The day had seemed to drag on; she was exhausted and looking forward to getting back home where she would hit the hay. She went into a metro station where she got on a train and made herself comfortable on a seat. She noticed a woman sitting opposite her who was staring at her intently. She tried to ignore it but each time she looked over, the woman was there with her eyes wide open and the woman had not blinked or moved in any way at all. That strange woman carried on staring at her.

At one of the stops a passenger got onto the train and sat next to her. He quietly advised her to get off at the next stop; she decided to take the advice because she was apprehensive about what the woman wanted. The next stop was a busy one and she thought if that woman tried to follow her, she would be able to lose herself in the crowd.

When the train came to the next stop, she hurried off the train and the man followed her. The man was relieved and said to her “I’m going to contact the police. That was really frightening. I didn’t want to alarm you on the train but the woman sitting opposite you was dead and there were two men sitting either side of her, keeping her upright.”