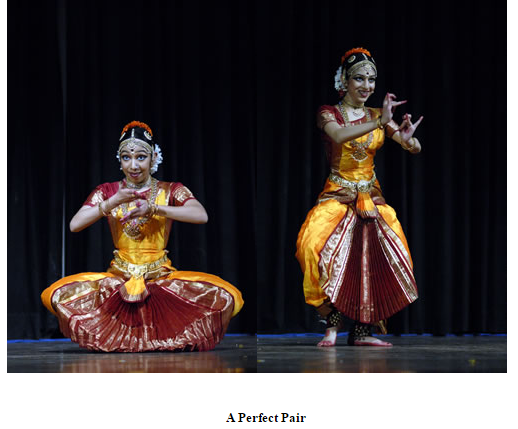 The two sisters, Geetika and Mantika Haryani, sixteen and thirteen years old respectively, had their Bharatanatyam Arangetram at the ISKON Auditorium in Delhi on 1st February 2009. For the young dancers, it was an evening to demonstrate how well they had learnt the classical dance over the past seven years.

Smt. Mala Murli of Nritya Geetanjali, who has distinguished herself as a Bharatanatyam guru, had instilled in both her students a level of confidence that allowed them to give of their best. Her own sensibility and individuality was also very evident in the dances performed by the two sisters.

The accompanying musicians enhanced the dance performance, particularly Shri K. Venkateshwaran, who had a rich voice and proved to be an able and versatile singer for the recital.

The Varnam, as expected, was the piece-de-resistance of the evening. The dance, set to the Sanskrit composition of Maharaja Swati Tirunal and describing the ten avatars of Lord Vishnu, required skill in abhinaya, tala and in the execution of intricate adavu jatis. With their graceful movements, neat footwork and good coordination, the dancers drew the spontaneous applause of the audience more than once.

Their recital concluded with a fast-paced Tillana, in Ragam Hindolam set to Adi Talam, in which the sisters performed the complicated adavus and tirmanam with joyful élan.

The Arangetram came together in all aspects – the guru, the dancers, the musicians and the dances. The dedicated enthusiasm of both the teacher and her talented disciples was very evident that Sunday evening.  Their debut on stage is something both Geetika and Mantika can justifiably be proud of. If they continue to train and practice with the same degree of commitment, we will have, in the coming years, two very fine exponents of this great dance form.