The Spirit of the Running Spirit By Neville Tuli 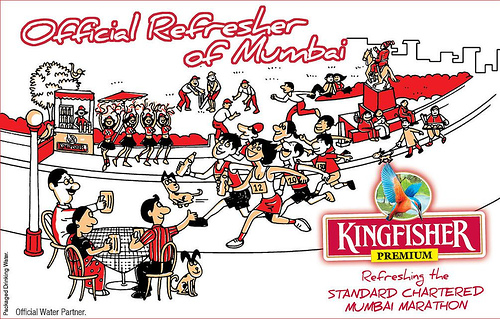 We did it, I did it. Mind has overwhelmed matter, delusions outlasted reasons.

I completed the half marathon at 9:14am, 21km in 2.30hrs, having never run more than 10km in my life, so pushing oneself beyond oneself as have thousands of others. One imagined the lungs and breathe would collapse first but the legs turned out more wobbly, after all I am a ‘veteran’ according to the marathon category, and childhood football probably took a greater toll than imagined.

It is unlikely that many would be able to have run the half marathon and have the stamina or will to go and write a few words to share with strangers, within the hour, but this need to write a few words finally became my motivation to finish the race (at the 14km point I think).

So many times the body was packing up, the knees crying, yet we dug deeper, and the body moved forward, and the mind tried to motivate itself to plug on. Initially I thought the run would be a good time for quiet introspection, to think clearly about all the issues which constitute one’s infrastructure-building responsibilities. Yet, after the motivational start with Rocky’s ‘Eye of the Tiger’ the first two km seemed so very tough, as if even six will not be reached.

As we moved into the third km only Prithviraj from Osian’s seemed capable of sustaining the journey. My Delhi staff seemed keen but had little clue about what 21km implies, but they came and competed with themselves, and are strengthened for the next challenge. After the first three km the breathe had already dried and there seemed to be no chance of completing this race by running, to walk seemed inevitable, but the mind naturally said not yet, at least reach six before your first walking step.

Then I saw a man pass me who was probably the age of what my father would have been today, and I smiled, so receiving another dose of energy. Quietly the mind kept focused, recognizing that all the strength lies within, that one has pushed on a daily basis for the last fifteen years, and so it will automatically happen now. When the legs and lungs tire, the mind will shout: not now, there is so much within, stores of energy you cannot see,