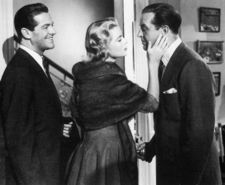 At a packed screening of Alfred Hitchcock’s 1954 classic Dial M for Murder, introduced and facilitated by Divya Raina, it was an eye-opener to how there is avid interest in the compelling cinema of the Master of Suspense. There was rapt attention throughout the viewing of the movie, as well as a very involved and intense discussion afterwards.

As Divya said in the introduction, “despite Hitchcock’s populist success, his work has always quite easily juxtaposed itself with that of Bergman, Renoir or Fellini.” She went on to add that Hitchcock had rightly been called “not only the creator of images”, but the “auteur of dreams; or the incubus of our deepest fears.”

This, she explained, was one of the key elements of Dial M for Murder, for what was not always recognized under its murder mystery format, was how “it explored the realization of the worst subconscious fears that can surface within marriage.” The film proves consistent to this with Hitchcock’s black humour of a husband intent on murdering his wife and a wife having an affair with another man.

She particularly alerted one to the underlying symbolism used in the film, such as the Freudian metaphors of the key-hole, the purse, theplacement of the letter and the door. Also highlighted was the intricately worked out colour scheme (Grace Kelly wears white in the first scene with her husband, red with her lover, and further on in the film when her life is in danger; somber grey).

The discussion that followed had several people bringing in the relevance of the ‘murder’ theme in the context of the current Aarushi – Hemraj case and there were  comparisons to the superiority of Hitchcock’s cinematic endings to various Hindi films. There was also a very engaged dialogue on the recurring preoccupations and themes in most of Hitchcock’s films, as well as the voyeurism motif and Hitchcock’s history with the heroines in his films.

There was, however, a sense of wanting more at the end of the event, a there was a clamouring for a Hitchcock festival in the same manner as conducted by Divya Raina, with many requests for various other Hitchcock movies, including his British period, and his relatively unexplored Marnie.