Sarkar Raj – a product of our times where Business controls Politics

Sarkar Raj – a product of our times where  Business controls Politics

A Review by Joya John 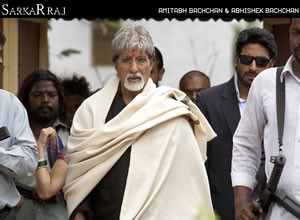 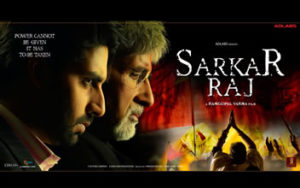 The movie Sarkar Raj belongs to a genre of Bollywood films that have repeatedly shown the nexus between the mafia and governments. The audience is reminded time and time again that politics and governments are not in the hands of visionaries and incorruptible leaders. This is essentially a politics of the crooks with ideals and the crooks with no ideals. The central question that needs to be asked of the film Sarkar Raj is why should the audience/spectator identify with the father-son duo of the film played by Amitabh Bacchan(Sarkar) and Abhishek Bacchan(Shankar)?

The film works through certain tropes that are typical of the genre of mafia movies. An old guard, epitomized in Amitabh Bacchan or Sarkar, makes way for a new leadership—Abhishek Bacchan or Shankar. Shankar becomes involved in a multi-crore-power project-, which we are told, repeatedly, will benefit the people of Maharashtra. The words, “badlav”,“development”, and “public good” achieve an incantatory quality when reiterated by the tough talking glib Shankar. Not surprisingly this project encounters a contradiction that we are now only too familiar with, post nandigram- people versus development. The construction of the power project will displace 40,000 villagers. Shankar travels extensively to convince villagers of the necessity of this project. We never hear these arguments because of a deafening background score that reinforces the aura of the leader Shankar. All we are given are a series of homilies on “welfare”, exchanged between Amitabh Bacchan and Aishwarya Rai.

However, opposition builds up to the proposed project and is spearheaded by Som, a peasant leader who convinces villagers that the project will benefit only the metropolis of Mumbai. The nature of this opposition is however suspect from the start and we learn later that Som’s resistance is only part of a larger Machiavellian politics to overthrow the Sarkar backed government in Maharashtra. Shankar, the visionary, is killed and Amitabh Bacchan or Sarkar discovers that the project was never meant to take off and “power to the people” was never the purpose of the project. Through a series of vendetta killings Sarkar, reestablishes the power of the “raj”.

The film Sarkar Raj ends with painting a rather grim picture of the world of politics. Interestingly its visonary-Shankar has strong links to the underworld and is not comparable to the student leader of Yuva, played by Ajay Devgan or a socially motivated protagonist like Sharukh Khan inSwades. Characteristically these would be the agents of social change for middle class audiences.  So why does Ram Gopal Verma, decide to deify a hero who is after all from the mafia?  Sarkar Raj is very much a product of its times when clearly the world of business controls politics. This has also meant that the self-proclaimed agent of social welfare is no longer the state, but big corporations. Sarkar Raj also depicts an old style mafia now diversifying into ‘clean’/aboveboard business. Ironically the film makes us believe that we are not watching a business venture take off but are in fact witnessing a welfare project to develop resources. The film is however a product of its own dilemmas. Can there be private profit with welfare? The film portrays power hungry politicians and money-grubbing businessmen who are not remotely concerned with welfare. In the grim world of Sarkar Raj, the public can only be pawns in the machinations of the powerful. Even when we see protest, the scenes of violence are strategic. Dissident peasants go on a rampage, destroying public property and attacking civilians and it becomes easy for an audience to distance itself from these concerns and see this protest as “incitement” of a misguided public. At the end of the day it’s the goonda with a conscience or the visionary businessman and their idea of public good that controls Ram Gopal’s plot. It is no small irony that Abhishek Bacchan has played the role of both the visionary entrepreneur in Guru as well as the visionary gangster in Sarkar Raj. Despite its rather patronizing subtext of public good being thwarted by corrupt politicians and unscrupulous businessmen and mafia the film Sarkar Raj deifies power not the people.