B B Nagpal
Senior Film Critic 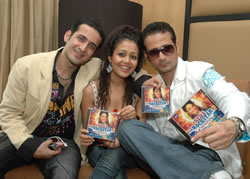 This is a new way to fight the menace of dowry – through rock entertainment that appeals to the gennext generation and takes the message home.

In her very first music album, this finalist from the second edition of Indian Idol has in a song categorically sent out the message that all the festivities will take place as usual for her marriage, but the expenses will have to be borne by the groom’s father.

And though stated lightly, Neha Kakkar told this critic that the message was not to be taken lightly. She said the song, written by her brother Tony, had conveyed a view that both the siblings held. Why is it that the bride’s parents have to bear the cost of marriage, and also pay dowry, she asked.

But ‘Tere Baap ka’ is only one of the eight tracks in the album, Neha the Rockstar, which has been brought out by a music company owned by a duo who are themselves well known in the world of Hindi and Punjabi pop – the Meet Brothers, Harmeet and Manmeet. In fact, this is the first album brought out by their new music company ‘Meet Bros Music’.

Neha, who marked her 19th birthday last week, said she felt that messages can be conveyed more powerfully through music since all the young people loved to listen to new numbers.

Asked why the Meet Brothers selected her, she said ‘I am happy they saw something different in me and selected me’.

She said she had been singing since the age of four when she would sing in bhajan sandhya (prayer meetings). She had not received any training.

However, she admitted she had been inspired by her sister Sonu Kakkar who has become popular with the number ‘Babuji zaraa dheere chalo, bijli kharhi yahaan bijli kharhi’.

When asked about the genuineness of reality shows, she admitted that there was a lot of written scripting in the ‘fights’ between judges, but said the shows were by and large genuine.

Harmeet said that the duo always believed in making songs on real situations. For example, when Rakhi Sawanthad planted her now famous kiss on Mika’s cheek, they had sung the song ‘Behen tune pappi kyun lee’.

Asked why they had gone to Mumbai to make a career in Punjabi singing, both Harmeet and Manmeet said that they felt that the metropolis was the right city for music. They also had a passion for acting and got a break in serials like ‘Kyun ki saas bhi kabhi bahu thi’ for which one of them one an award, ‘Kumkum’, ‘Kalash’ and some others.

Music was something they had done from childhood, but it was only ZEE TV which first recognized their singing talent.

When asked why they had decided to launch their own music company, they said the existing companies appeared to have lost interest in genuine rock stars.

They felt that Neha was a natural as she was not just a good singer, but also a gifted dancer. Furthermore, they felt that singers who took part in reality shows were often forgotten later.

Asked about the concept of the father-in-law paying dowry, they said that the launch of the album in Mumbai had been unusual when the girl came on a ‘ghorri’ (horse) and the ‘groom’ went in a ‘doli’.

On a serious note, they said several women’s organizations had approached them to perform this song in the presence of audiences.

They were now planning a Sufi album of their own and had signed three other artistes as well.