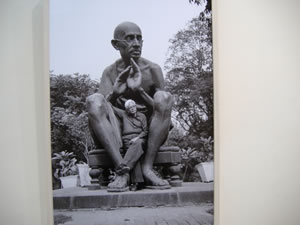 When does one become a tourist of reality? Can photography explain man to man? It was a famous photographer who once said; “A photograph is a secret about a secret…the more it tells you the less you know”. These thoughts came to mind while visiting Ram Rahman’s recent photo exhibition called Bioscope, held at the Rabindra Bhawan Gallery in New Delhi recently. From the wonderfully intimate collage mounted at the beginning of the exhibition; featuring Ram’s famous parents, dancer Indrani Rahman and architect father Habib Rahman, it felt like an instantaneous view of the entire trajectory of Ram’s life from infancy onwards.

The exhibition consists mostly of black and white photographs, with compelling images and portraits of both the well-known and not- so –well- known, taken at various periods in this extraordinarily gifted and socially committed designer and photographer. Ram’s forte is in the capturing of the moment and freezing it in time. The overhead view of Safdar Hashmis funeral, for instance expresses the horror and sense of solidarity at this most ghastly slaughter of an amazing life.

Also, Ram revels in the relationship between foreground and subject and there is generally an extraordinarily fraught tension between the two as can be seen in the accompanying picture of painter Bhupen Khaker in the lap of Gandhi.

Whether Ram has taken pictures of left- liberal friends and SAHMAT colleagues, or pictures of Rajeev Sethi and other “culture-czars “ and “czarinas” or of wrestlers or of inanimate figures, dummies, posters and graffiti, everything is touched with a faintly self-mocking irony. Finally, these pictures at the exhibition, tell us more about the photographer himself, his concerns and ultimately his “ethics of seeing”.