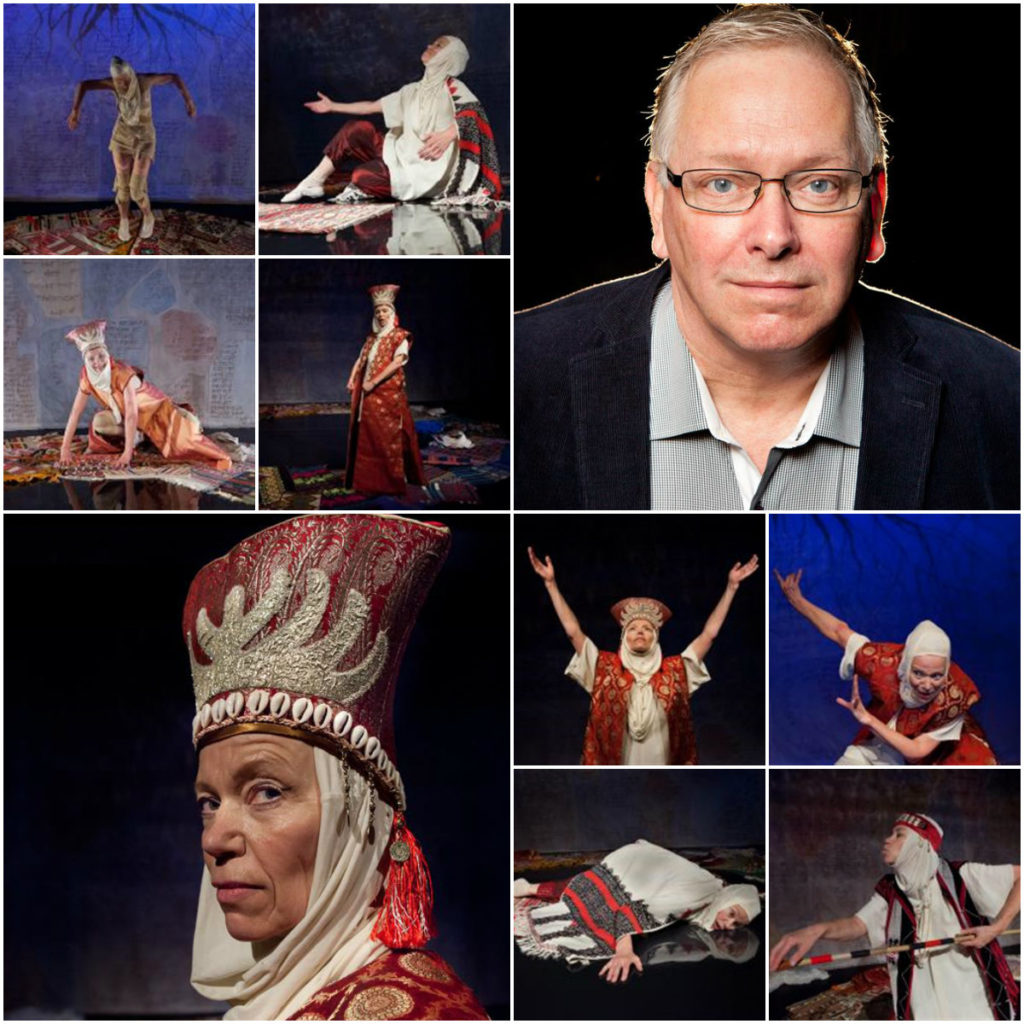 The stage version of Mun lean Inanna (I am Inanna) staged four particular stories: The first story deals with her acquiring her throne and bed, symbolic of her role as queen and womanhood, her sovereignty and sexuality. In the second story, Inanna acquires from the god of wisdom and culture, the attributes of civilization. The third story is the story of love and partnership. Inanna takes the shepherd Dumuzi as her consort and makes him king. These three myths collectively represent three of the four stages of human development: the establishment of individuality, interaction with others on an intimate, one-to-one basis, and one’s involvement in the outer, mundane world. In the fourth story, Inanna abandons all the glories of heaven and earth, to make a journey to her sister Ereshkigal in the Netherworld, the journey “from which no traveller returns”. Ereshkigal is enraged when Inanna arrives, and sets the eyes of death on her. Inanna is turned into a corpse and hung from a hook on the wall. Inanna’s grandfather Enki rescues her from death, but Ereshkigal demands that Inanna must provide someone to take her place. She sends the demons of the Netherworld to accompany Inanna until the issue is solved.  When Inanna arrives in Uruk, she finds Dumuzi sitting on the throne, lavishly clothed, seemingly oblivious to her absence. Inanna, displeased, decrees that the demons shall take him. Dumuzi’s sister, Geshtianna, mourns her brother, and out of love for him, she begs to take his place. Inanna is moved by Geshtianna’s grief and self-sacrifice, and decrees that Dumuzi and Geshtianna will take equal shares of his fate. Inanna makes both of them immortal.

This stage version brings together the old lyrics from ancient Sumer in the Sami language, Sami music, Japanese-inspired movements, costumes inspired by the Middle East and textiles from indigenous people all over the world.

Haukur J. Gunnarsson, artistic director and general manager of the Sami National Theatre Beaivváš from1991 to 1996, and again from January 2007. As a freelance theatre director he has directed more than 70 productions in all the Nordic Countries. He has also done some costume design and choreography. In 2003 he was awarded the UNESCO Uchimura Prize for promoting Japanese theatre in the Nordic countries.