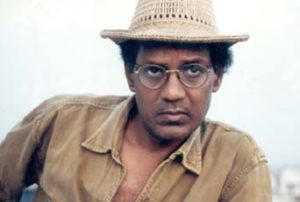 Virendra Saxena comes from a modest background and hails from a small town – Mathura. Veeru and I also worked together in Badal Sircar’sSpartacus in the eighties – a play he also translated. While I did the role of Batiatus – the slave dealer, believe it or not, Veeru, despite his wiry frame, did the lead role of Spartacus. So it is no surprise that he has risen so high, the real surprise is that he after his stellar performance in Tamas he has taken so long to get where he is. While there is a mind boggling list of TV serials, films and plays that Saxena has acted in he has translated and adapted 18 plays, Two of his adaptations are published. He also wrote the dialogues of the feature film ‘ Tunnu Ki Tina‘. Little known to most people, Saxena is a science graduate who has developed a computer database of 2000 actors. A near miss was an offer to act in Speilberg’s ‘Terminal’. Saxena was very disappointed when at the last minute it was decided to replace Veeru with a Pakistani actor. In an industry dominated by stiff wooden faced models, Saxena, an NSD graduate, is one of the few performers holding fort for the real acting professionals.