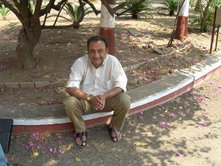 Naveen K. Gupta was born in Delhi but grew up in Trinidad & Tobago, where his Professor father was on deputation as Second Secretary at Indian High Commission. He Studied at the Queen’s Royal College, where  his teachers and Television ignited his love for Hollywood. Naveen taught English Literature in DAV Public School before getting selected as a Producer in All India Radio in 1991. He was responsible for conceptualizing the programme format of AIR FM 102.6 MgHz, wrote the first FM Radio column in TOI under the pseudonym ‘Antenna’, and in 2003 became the youngest Drama Producer to have won the First Prize in Aakashvani Annual Awards.

He went to The Film and Television Institute of India (FTII), Pune to read for his Screenplay course in 2004. And then went on deputation as external faculty (screenplay) and officer on special duty (FTII, Director’s Office) in 2005.Naveen has written for three feature films, and at present is trying to write his first novel ‘The year of Innocence,’ for his late mother, who lost her battle against Parkinson’s in Feb.2008. Naveen is currently working as Producer (English Talks) at AIR, Delhi.