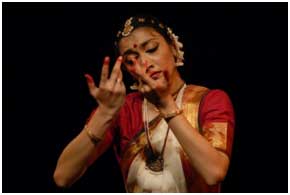 Still from Sadir to Bharatanatyam

This year’s Annual 2012 Open Frame Film Festival, organized by the Public Service Broadcasting Trust, included a series of compelling, thought-provoking films on a variety of diverse subjects. Light on the Dark Side (2012), a documentary directed by Geeta Singh, stood out in its aesthetic restraint. While its subject dealt with the phenomenon of blind individuals who had discovered their latent genius for photography, the film’s tone remained controlled, light and celebratory, ending with a close up of the determined, relentless strumming of the sitar by one of the blind photographers who was also musically gifted. Nidhi Tuli’s A Saroj Khan Story (2012) was a stirringly poignant eye-opener into the Bollywood industry, captured through the portrayal of a brave and talented genius. The film delved into the life of Saroj Khan, arguably one of the greatest choreographers of the industry, yet consigned to a relative obscurity. Saroj’s vulnerability and heartbreak were brought out at every point, with the film interspersing conversations with her, alongside visually creative ways of revisiting landmark moments in Bollywood. In Freedom Song (2012), co-directors Paranjoy Guha Thakurta and Subi Chaturvedi combined eclectic musical styles and references to popular culture in a brilliantly engaging and intensive documentary interrogating the levels of intolerance in India, with a special focus on the ethical dilemmas surrounding freedom and artistic expression. Delhi-based filmmaker Viveka Chauhan’s Sadir to Bharatanatyam (2012), a documentary tracing the evolution of a classical dance form in India – Bharataynatyam – left a lasting impression. The film, which incorporated insightful interactions with brilliantly gifted dancers Navtej Johar and Aranyani Bhargav, pitted the historical evolution of the dance against questions of modernity and its influences on perceptions of the body, sensuality and culture, through a stunning interplay of music and dance put together in a brief 27 minutes. The screening was followed by a discussion with director Viveka Chauhan, historian Uma Chakravarti and moderated by filmmaker Anandana Kapur. When asked what inspired the theme for her film, Viveka Chauhan responded that she’d been reading about it for a long time. “Whenever you talk to people there’s a kind of ‘hush-hush’ about it. There are not even enough dancers who really know about the Devadasis,” she elaborated. Bharatanatyam as a dance had itself become synonymous with Indian culture. She referred to the insight Navtej Johar had made in the film – that bharatanatyam dancers had in some senses become literal “ambassadors of Indian culture”, a state of affairs Johar himself found counterproductive to being an artist. A fascinating and detailed discussion shaped itself around the clash of modernity and its implications in terms of sexuality, the body, and the history of the Devadasis, who were originally viewed as court dancers; a perennial moral taint surrounding them. These origins were sharply countered by their successors who developed a more spiritualized outlook, as if to wipe out the previous image. Someone in the audience made the comment that Muthulakshmi, “the daughter of Devadasi”, was highly “moralistic” and yet had to face the consequences of this taint. As Navtej Johar asserted in the film: “In the original tradition, sensuality was considered alright, it was accepted and a natural part of the dance and its beauty. Now, with modernity, it has become ‘coy’ and ugly and unnatural, and this has problematized things to quite an extent.” On the suggestion that the film was postmodern rather than modernist, in light of its exploration of ‘bodies’ and ‘culture’, and of a “gay male dancer finding himself creatively through such dance”, Chauhan responded “We wanted to look at history here, and that always alludes to sensuality. In the past, even a certain gesture or movement would mean something and hold significance.” Uma Chakravarti commented on how the transformations in the 80s and 90s development of feminist theories had opened up the way for interior stories and that questions of gender were critical to creative expression, as were those of identity. Viveka Chauhan revealed “Aranyani Bhargav is dealing with the same issues, and she says a lot of young people are in training but really aren’t aware of this heritage, and even the ones that are, don’t know what to do with it.” Another notable film was the 52 minute documentary Marine Drive (2012), directed by Krishna Bagadiya. In the discussion that followed, Bagadiya related how he had grown up living in Marine Drive; he had seen Shah Rukh Khan and Salman Khan dancing in the streets under his window and it had always held a special place for him. Moderator Samina Mishra asked if he had planned to have the film focus so much on his uncle Atul, and people in the audience were curious as to how his family had reacted, considering the film seemed to exclusively feature them in unflinching detail. Bagadiya replied that his family hadn’t seen it yet, but went on to make the disclaimer that throughout shooting, everyone had been responsible for what they were saying and he hadn’t in any way ‘commented’ on them as a director. He added “I’ve taken a cell, an organ, of a part of Bombay, and tried to show one person in the film – my uncle Atul.” On how the title was connected to the themes explored in the film, especially his focus on Marwaris, he explained “A location has an impact on its people. Take Sunset Boulevard, or David Lynch’s Mulholland Drive. Marine Drive is very special because you have a lot of family homes, like havelis, and there are many Marwaris settled in this area. And my uncle – perhaps I can explain it this way – Bombay was like Sin City, and my uncle is a product of Bombay, and a product of modernity, including its vices and its glamour, and this sits uneasily with the other theme of tradition.”