Gates, Walls and the Loss of Common Ground by Joya John 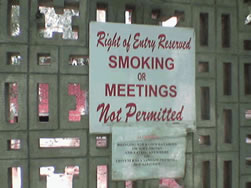 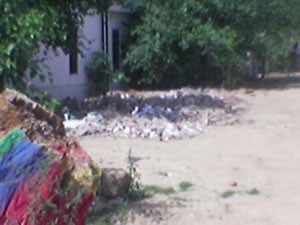 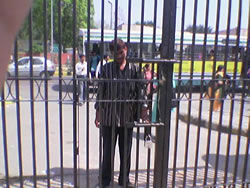 Locked out – no short cut to NSD

We live in a world that has become increasingly paranoid about security. Terror is, however, also a ruse by which public space is being taken away from the public. The private security guard, underpaid and overworked, now monitors our entry into public spaces. Unknowingly he has become an agent of a new surveillance. He is trained to recognize the insider from the outsider. The identity card has become the new passport. A number of public spaces have slowly become off limits. The porous boundaries of spaces have now ceased to exist. Gates have closed citing security risks where earlier they were open.

The gate that divides the two largest post graduate women’s hostels in Delhi University was closed citing thefts. The gate was earlier open from 9pm at night till 6 am in the morning allowing personal and cultural interaction between students. Often it is the very materiality of newly renovated spaces which has made the congregation of people impossible. The garden around the Vivekanand Statue, in the Arts Faculty, Delhi University is one such example. In the past this garden embodied dissent, it was a place where people congregated, sat and discussed while the imposing statue of Vivekanand looked on. When the garden was replaced by concrete, the same space has become a barren landscape, too hot to spend time in, perhaps adding new meanings to the taciturnity of the statue that looks on. Where concrete didn’t work a garden did. The Shaheed Bhagat Singh Park, near ITO, has been enclosed. The park’s proximity to all the major newspaper houses is probably one reason.

The aesthetic of new spaces is the nature that the metropolis now boasts of. Like the serenity of nature that reinforces that all is right with the world, we now look to our sanitized worlds to reinforce our new prosperity. The swish, hip interiors of public spaces, along with new gadgets for scrutinizing who enters, have a way of enforcing etiquette of social congregation. We  congregate in cafes with music too loud to carry on any conversation and the old places of community warn us that meetings are no longer permissible

(For old frequenters of the Triveni Canteen, which was the hub for cultural groups to meet and discuss, the notice banning meetings and discussions comes as some surprise. It has become increasingly difficult to find places to perform and rehearse for free. Inside Bahawalpur House precincts of The National School of Drama, the popular depression known as the  ‘Khud’  has been filled up and perhaps by accident, or more likely by design, is now a dump for malba)

The writing on the wall both literally and metaphorically, in Delhi, is clear that someone wants its walls to speak the language that endorses the new world. Wall writing has become impossible. Within a night the walls are sanitized with a fresh coat of paint. For example, in Delhi University, there are now select places for putting up posters. Ironically they are called “Walls of Democracy”. Our public walls speak to us. Who decides what gets said through them? A blank red brick wall tells us there are no stories to tell. An “ugly” wall talks to us, offends us, appeals to us and asks us to take positions.

The new public spaces are built on a new exclusivity. As soon as the old dhaba is replaced by a swanky new café, the prices on the menu go up. Renovation and up gradation in every public facility like a library or a hostel has necessarily meant beefing up security and exclusivity. Often enough, our demands for privacy or unhindered access to what we pay for has ensured that those less fortunate cannot access the same space. We are now spending less time with those whose ugliness might offend us. We don’t need to see them anymore. The polished, glass surfaces of the new spaces are our new futures. Futures with no memory of the past, of community and of dissent.

Joya John is a lecturer in the English department, Gargi College.