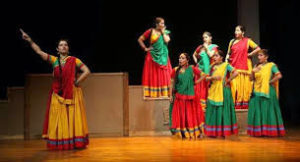 A review by Manohar Khushalani

National School of Drama’s “Ghazab Teri Ada”, an anti-war play, adapted from Aristophane’s Greek comedy, Lysistrata, was staged at IIC. Adaptation, music design and direction is by Waman Kendre and light design by Suresh Bharadwaj. The play was initially performed at NSD as a tribute to war victims around the centenary of World War I. However, with the prevailing war psychosis, the play has contemporary relevance too. Taking a cue from the Greek play, first performed in classical Athens in 411 BC, which was a comic account of one woman’s extraordinary mission to end the Peloponnesian War, the protagonist of the Hindi play, Laya, convinces the wives of soldiers, to withdraw sexual favours to their husbands, until  they agree to desist from fighting the War Mongering King’s battles. In the non-violent protest, even the Queen is co-opted. In order to seal all alternatives for men, even the lady brothel-keeper is made a co-conspirator. There are hilarious scenes of desperate men trying to win favours first from their wives and later, in futility, from the women in the brothel. Even the King is brought on his knees by the Queen. The play ends with the soldiers laying down their arms.

The racy musical, with a folk flavor, has been intricately designed by Kendre. The women’s protest, was unusually orchestrated with strident ringing of hand held temple bells, in a martial style. He avoided the obvious Ghungroo, realizing that it was more a symbol of femininity than feminism.

The Review Published in IIC Diary