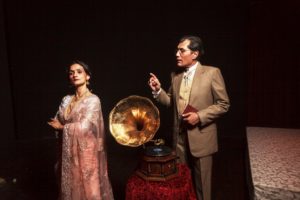 This is a fascinating story of one of the classical superstars of her time and a fiery, feisty, independent minded woman of her generation, who was the first to sing on a wax record, and whose personal life was as mesmerising as her professional one. The play also offers an exciting glimpse of that period… Allahabad, Benares, Lucknow and Kolkata at the turn of the 20th century, both from the historical, political and cultural point of view! The play will have some live singing, though it is essentially a drama. It’s an important, powerful and moving story of a person who was a pioneer of the Thumri Tradition in Indian Classical Music and the play is a revelation for the younger generation, who know little about those times or about this great musician. Her story has all the ingredients for a very exciting and dramatic script, which will appeal not just to music lovers, but to lay audiences as well.

Lillette Dubey is a renowned Indian film and theatre actor and a theatre director. She has been Artistic Director of her own Theatre Company. The Primetime Theatre Company, for over 28 years and her theatrical work, which has travelled the globe, has been much acclaimed nationally and internationally, both in the sphere of actor and Director. Over a span of nearly 40 years, she has played the lead in over 60 theatre productions ranging from Shakespeare, Greek Tragedy, Brecht, Musical Comedies, Farce, Contemporary Drama, Absurd Theatre, to Contemporary Drama, including Ibsen, Tennessee Williams, Arthur Miller, Pinter, Dario Fo, Edward Albee and a gamut of famous Indian playwrights, from Vijay Tendulkar, Partap Sharma, Mahesh Dattani, Girish Karnad, Mahesh Elkunchwar to name just a few.

Most of the plays she has produced and directed, platform outstanding Indian playwrights, and many have won Best Play of the Year awards, and many have received Best Director and Actor awards at National Festivals. Ms. Dubey herself has won several Best Actress awards for her plays and films, including for Adhe Adhure (META 2013), Pankh (Jagran Film Festival 2010), Driving Miss Palmen (Dutch TV 2007), Bow Barracks Forever (Madrid international Film Festival) and others.

Several of the Company’s productions, directed by Ms. Dubey, have traveled widely across India and abroad, with a few having played for long runs at the Bloomsbury Theatre & Watermans in London, at the Tribecca in New York, at the Portland International Performance Festival in the U.S, as well as in Chicago, San Francisco, Houston, Dallas, Washington DC, Stamford, Raleigh (North Carolina), Los Angeles, Boston and New York.

Mahesh Dattani is a playwright, stage director, and filmmaker. In 1998 he won the Sahitya Akademi award for his published plays. His plays are taught in several universities across the country and internationally as well. The International Herald Tribune hailed him as “one of India’s best and most serious contemporary playwrights”. He lives in Mumbai.

The Primetime Theatre Company was set up in March 1991 with the twin objectives of providing a platform for original Indian writing in English and travelling with its work across India and abroad to showcase indigenous work in different cultures and milieus, and also explore performances in different spaces and venues. The company has tried to showcase its work to the largest possible audience at prestigious International and National Festivals to Educational Institutions of all kinds, from Supper Theatre to some of the best performance venues in the world, from large open air auditoria to pocket sized black box theatres from factories to gardens.