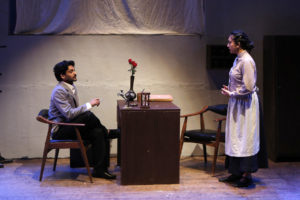 The Play
The son, Jan, who for 22 years has been living in an unnamed land, returns to Europe to visit his mother and his sister, Martha. He comes with his wife, Maria, and decides not to disclose his true identity. This is unfortunate, because the two women, who run a lonely inn, murder their guests and rob them for survival. The only other character is the mute manservant, who in the final scene is Camus stand-in for God.

Director’s Note
The play is based on Camus’s concept of an unjust and indifferent world. The misunderstandings of the play exist on several levels, all of which are applicable to life. First there is the simple misunderstanding of identity. Then there is Jan’s failure to recognize the importance of words in relationships. There is the misunderstanding of Maria who failed to recognize that men and women in love cannot share every moment and at some point must part. The mother failed to recognize the promptings of her own sympathy and valued her need for peace more than another
human being. And there is Martha with her own complexities. So for me, these misunderstandings separate a human from himself, from others and from the world. Human desire is in a perpetual conflict with a world that is arbitrary, illogical and unfair; and the life is equally cruel to the innocents and the criminals which defines the absurdity of existence. Just like the saying “grass always looks greener on the other side” the characters of this play dream of something beyond their league and these farfetched ambitions become suffocating for each one. To sum it all “everyone imagines their heaven in the place where somebody hell is”.

The Director
After graduating from Indraprastha College for Women in 2014, Aruja completed her Diploma in Dramatic Arts from National School of Drama in 2017 with specialization in Design andDirection. She is practicing theatre since 2002 with prominent theatre personalities and artistsacross the country. During college days she has directed and acted in various plays and hasrecently assisted Sanjna Kapoor in a Children’s Theatre Workshop and film director Leena
Yadav in her forthcoming venture, Rajma Chawal.

The Playwright
Albert Camus was born on November 7, 1913, in Mondavi, French Algeria. Camus became known for his political journalism, novels and essays during the 1940s. His best-known works, including The Stranger (1942) and The Plague (1947), are exemplars of absurdism. Camus won the Nobel Prize for Literature in 1957 and died on January 4, 1960, in Burgundy, France.

The Group
This play is being presented as a part of national school of drama’s graduate showcase (class of
2017), which aims to provide a platform for emerging theatre practitioners, allowing them to
share their work with a wide audience.