Madhubani Art form, also referred to as the Mithila art form is a style of Indian paintings that finds its roots in the northern Bihar region of India and the lower regions of Nepal. The Madhubani art form is remarked and characterized by the complex geometrical patterns that these paintings employ to represent ritualistic content of occasions such as festivals etc.

Madhubani paintings find their origin in the Mithila region of Bihar. The tale of Madhubani paintings goes back to the times of Ramayana where it is said that when King Janaka, the father of Sita, had asked the painters of his kingdom to create paintings for his daughter’s wedding, the art form came into existence. From there the knowledge has been passed down to generations and the paintings have beautified the homes of people illustrating thoughts, hopes and dreams.

In its initial phases, the Madhubani art form was practised by different strata or sects of peoples which led to the categorization of the art form into five categories viz. Tantrik, Bharni, Godna, Katchni, Khobar. However, with the dissolution of sect and caste-based lines in contemporary times, these styles of Madhubani art form too have fused together. The theme of the Madhubani paintings is heavily focused on the Hindu deities like Krishna, Rama, Durga etc along with heavenly bodies like the sun and the moon. The paintings also illustrated the scenes of the royal courts and social events like weddings and festivals.

The Madhubani paintings are the most famous for their use of complex geometrical figures complemented with the simplicity and the use of brush and the colours often sourced from natural resources. The paintings are predominantly made using powdered rice, along with colours that were extracted from pollen, pigments, turmeric, and leaves and flowers from an array of trees. The empty spaces in the paintings are often filled in with motifs of the flowers, animals and geometrical patterns.

The Madhubani art form is the storehouse of aspiration of the common people illustrating everything from their beliefs to hopes and thoughts.

The Play
Satya Yuga (era of truth) was an era when gods, demons and humans cohabited the earth. Set in this time is the story of goddess Kumari who came to rule the kingdom of Kathmandu. The legend describes a young goddess Kumari, born to the gods Svet-Kali and Svet-Bhairav in the neighbourhood of Nardevi in ancient Kathmandu. To their alarm, she falls in love with an asura (demon), Chanda. Their tumultuous love story ends tragically, as Kumari ultimately sacrifices her love to in order to fulfil her duty. Her parents in return, make her the ruler of Kathmandu.
Kumari and the Beast is an interpretation of the story told by Maheswor Juju Rajopadhyay in his book of short stories Nepali Adhyaatma Jagat ko Itihas (History of Nepal’s Spiritual World). The story is presented through a fusion of Nepal’s classical Charya dance and contemporary dance-movement, with live music and vintage photography.

Director’s Note
Three things attracted me to this story: First, the story provides a fascinating role model of how a female child can hold one of the highest positions of social and political power, and can remain unmarried of her own will. In a world where power has been known for eons to be held by the senior-most male, the relevance of such a figure is immense.
Second, the story’s central theme of ‘forbidden love’ remains as relevant today as it was ages ago. Society’s condemnation of certain kinds of love based on caste, creed, gender, race etc. continues to trample on the fundamental right to choose.
Last, the sacrifice of the beast is symbolic of the price that society extracts from each of us.

The Director & Playwright
Kavita Srinivasan has focused on stories of culturally iconic figures like Gautama Buddha and Goddess Kumari, reinterpreting and telling their stories in a way that fuses the classic and the contemporary, focusing on the human element, through movement, dance, music, theatre and visual art. She also created Nepal’s first online sitcom P.S. Zindagi (Post Seismic Zindagi) which won local and international recognition. Kavita has done two Masters – in Architecture, and in City Planning – from the Massachusetts Institute of Technology (MIT, USA).

The Group
Sushila Arts Academy (SAA) is a theatre dance music and arts institution in Kathmandu, Nepal founded in 2012 with the aim to promote the Arts in Nepal. Since its establishment, it has been providing hundreds of scholarship seats to talented but financially limited or underprivileged Nepali students. The Academy has delivered numerous musical and theatre-dance productions, art exhibitions, shows and various art programs, all aimed at promotion of the arts in Nepal, as well as giving a platform to young, talented Nepali artists to flourish further.

Along with Dev Anand, Waheeda Rehman, Shahrukh Khan and Manisha Koirala, Manohar Khushalani was invited, by the Indian Embassy, to Kathmandu to attend the celebrations of 50 years of Indian Cinema as a Columnist of Pioneer, where he ran a column called “Footlights’. The clip of the review published on 2nd May, 1997 is shown in the attachment. Here is a small extract from the 7 column spread that Pioneer gave his piece.

Probably the best public relations exercise between two country is to establish a people to people interaction through cultural activity.  Raj Kapoor was probably the best Indian Ambassador of good will for the soviet Union. Nobody perhaps known it better than the snake Indian Ambassador to Nepal. K.V. Rajan.  By organising a festival of Indian films at Kathmandu he proved that what Raj Kapoor did at USSR Dev Anand can do in the Land locked Himalayan State. The incredible love and affection of Nepalese common men for Indian actors was brought home by the adulatory response to four Indian  sorry three Indian and one Nepales star; Waheeda Rehman, Dev Anand, Shahrukh Khan and Manisha Koirala.

“I am very fond of nature & open spaces.  In Bombay  it was difficult. What I noticed was that when they retired from cinema long ago, my son was still in school. When someone asked him, where the milk came from. He said Mother Dairy. That’s when we decided to move to a Farm and expose our child to that aspect of life as well.”

Waheeda Rahman who is leading a more or less retired life & last asked nearly seven years ago is willing to perform only of she gets a central role. “Unfortunately most of the roles available for performers of my agee are stereo typed roles of Aunts or mothers, I would rather not perform than take up such roles”

Waheeda shifted bag & Baggage to a farm house in the outskirts of Bangalore because of she put it her children were not even aware about how the milk come they only knew that it come from a machine in the milk booth. Being a lover of nature she preferred to shift close to it….

“I am very fond of nature & open spaces.  In Bombay  it was difficult. What I noticed was that when they retired from cinema long ago, my son was still in school. When someone asked him, where the milk came from. He said Mother Dairy. That’s when we decided to move to a Farm and expose our child to that aspect of life as well.” She told me, this too when we were flying later over the everest and I was seated next to her. Both of us were admiring the pristine beauty of nature

Dev Anand despite his severely years displayed such energy and enthusiasm that he would put many younger people to shame. He said that he was greatly in love with this Country and would never forego an opportunity to come to Nepal. He had always advocated that this Country was a good location of or shooting films but not many producers were willing to come due to difficulties of terrash & communication. Dev to probably the most active amongst the stars of his generation. Right now he was making a film in which he was acting as himself © Dev Anand as the actor. A teen age female fun follows him around the counting observing him as an action. She finally manges to meet him. The story appeared to be similar to Guddi.

Later at a function to felicitate the stars. Dev held the audience spellbound with his half hour long talk which was special with experiences of Nepal, tales of the role of the King in shooting of his films and personal advice on how to lead a dynamics life like him.

Manisha Koirala’s entering was greeted by compliments to her beauty and brains in Dev’s inimitable style. The local scribes were most comfortable with Manisha in her native tongue. Ms Koirala had no plans to act in a Nepali film in the near future she left it vaguely to events and occassions. 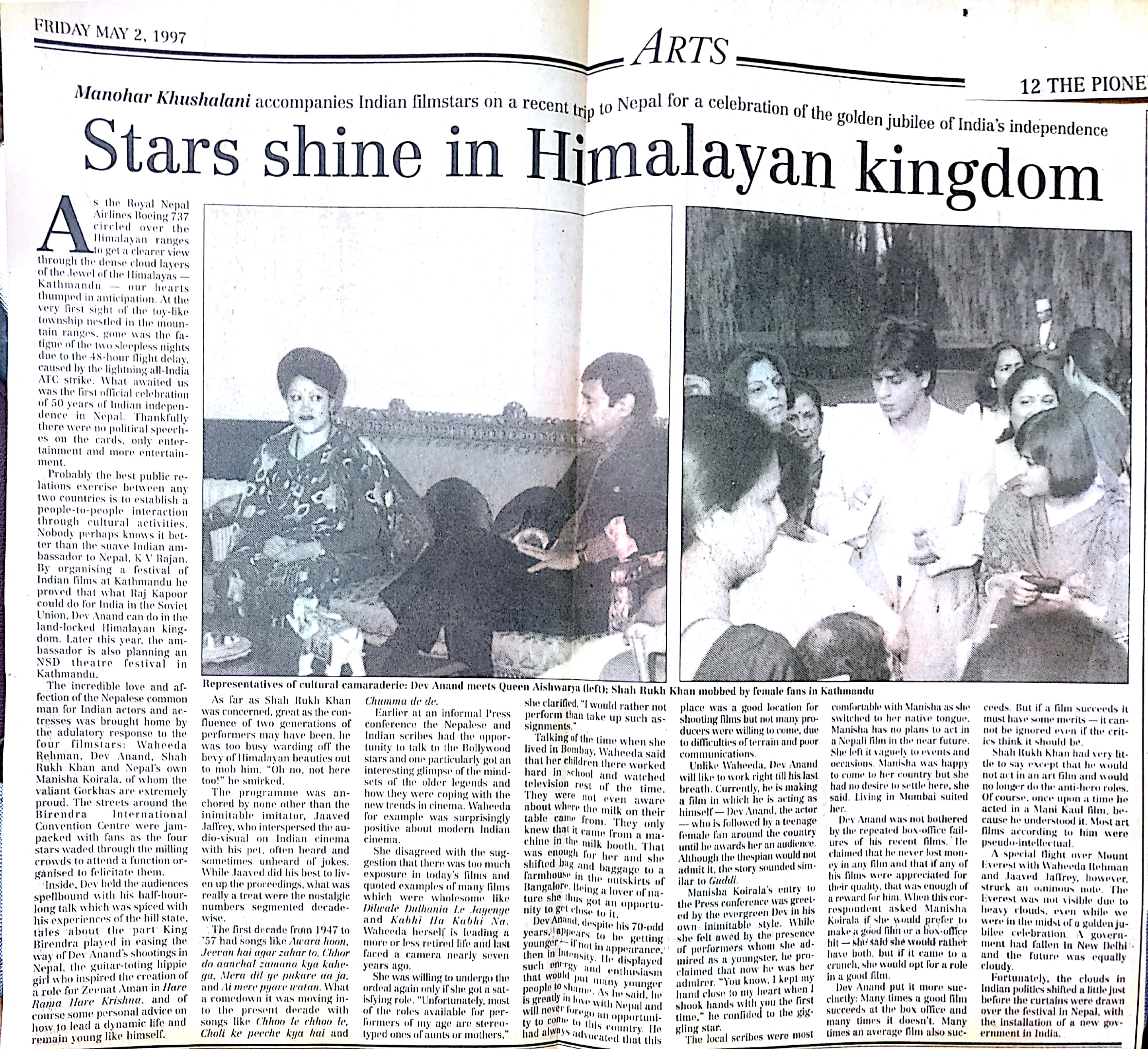