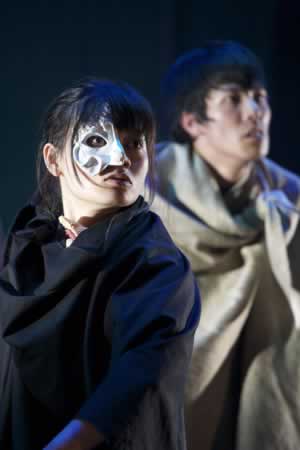 There are a lot of stories in Indian mythology and folklores where you find the snake or the serpent as sexual motif. Some modern plays  are also based upon it. For example Girish Karnad’s play Nagmandala. The snake as sexual motif is not limited only to India. In 13th bharat rang mahotsav, the Japanese play Ugetsu Monogatari (directed by Madoka okada) also presents the snake as a charmer and lover of human being.

It is story of 10th century Japan. There is a young man, named Toyoo, son of a fisherman. He lives near seashore.  A beautiful woman named Manago comes to his home in a rainy night. Toyoo is attracted towards her. He also lends his umbrella and promises to meet her again in near future. After some days he goes to her house on the pretext of going back his umbrella. During that he gets intimate with her. Manago gives him a beautiful sword as a token of their relationship.  But after sometime it comes out that the sword was stolen from a shrine. Toyoo is caught by the officials on the charge of theft. He is taken to the house of Manago and there it is discovered that actually Manago is not a woman but a serpent. She   transforms herself as a woman to get Toyoo love. Now the question is what will happen of their relationship. Will Toyoo accept Manago, the serpent as his beloved or leave her?

Ugetsu monogatari is a play about coexistence of natural and supernatural in human life. We are fascinated by supernatural things but it is not always joyful. Sometime pain and sorrow also come with joyful supernatural. Are we ready to accept both of them? Or we want to enjoy one and discard the other thing? Actually ambivalence is part and parcel of life.

It is a stylized play and full of body movements. Four actresses play role of Manago one actor of Toyoo. The director of the play Madoka okada is known for his experimentation. He also assimilates the linguistic beauty of Japanese and traditional theatre of Japan. There are elements of pantomime in it also. It must be underlined that there a good plays from non-western countries in this festival. It is time to call it international bharat rang mahotsav.