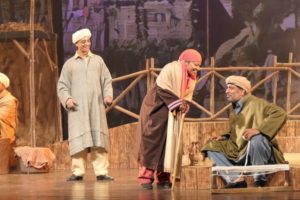 This play is a translation of Fiddler on the Roof written by Joseph Stein. It is a musical that deals with the displacement of communities. The story is neatly bound to the Kashmiri situation in our country. Prithvi Nath loves his daughters, and goes against the traditional norms, allowing them to marry men of their choice. Shuhul, the third daughter chooses to marry a Muslim…

Going along with the central theme of the play, the contemporary situation of our society took the forefront. The final situation chosen is the plight of the Kashmiri Pandit community. This choice is to support the script with a relevant social background which can be projected on a larger canvas, and can highlight the pain and problems of the people who have been displaced from their own land.

Suresh Sharma did PG diploma with specialization in Acting from National School of Drama in 1985.

In 1987-88 he established the only non-government Repertory in the district of Mandi (Himachal Pradesh). From 1996-98 he worked as the Artistic Director of Sri Ram Centre for Performing Arts, Delhi. In 1998 he established the first non–government fully residential Theatre Academy in Mandi, Himachal Pradesh. Mr. Sharma has been felicitated by Sahitya Kala Parishad. Sangeet Natak Academy awarded Mohana, a play written and directed by him, under the Young Director’s Scheme.

A playwright, actor and director of great repute, Asif Ali Haider Khan obtained a PG diploma with specialization in Acting from Nation School of Drama. Later, he worked with NSD Repertory Company as an actor for many years. He received the Sangeet Natak Academy’s Ustad Bismillah Khan Yuva Puraskar for playwriting in the year 2006. Currently, he is teaching Modern Indian Drama at National School of Drama, New Delhi.

Established in 1964 with only four members, the Repertory Company is the regular performing wing of the School. It was set up with the dual purposes of establishing professional theatre on one hand and continuing with regular experimental work on the other.