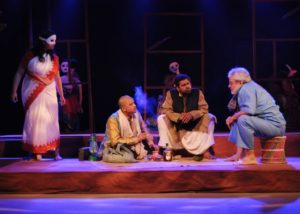 The play is woven around the simple promise of four men, from different walks of life, chatting at the funeral of a young woman. The play is set in a Shamshaan Ghat (Cremation ground) where the girl’s dead body is being exhumed on the funeral pyre while the four men, drink and play cards. A mystery shrouds her death but, when they try to examine the reason/truth behind her death, skeletons from their past start falling on them. Unraveling the deep secrets of their – external and internal worlds. The woman’s specter haunts, staring down on the four, compellingly to encounter their lost, love and guilt, while revealing her lifelong longing for true love.

An Alumnus of National School of Drama, Bipin Kumar has directed approximately 30 plays in various Indian languages with theatre groups & corporate sectors in India. He was conferred with Sangeet Natak Akademi Award for Direction in 2018. Formed Kshitij Theatre Group (1988) in Delhi, and has been associated with it since then. He is a visiting faculty member of drama departments at Ranchi and Gwalior University. Co-produced feature film Kaala Heera for Zee channel, on Chasnala coal mine disaster; a comedy serial of 13 episodes name Gadbad Ghotala for Doordarshan. Currently he is deputed as zonal director of the National School of Drama’s Sikkim Theatre Training Centre, Gangtok, Sikkim.

Badal Sircar (15 July, 1925–13 May, 2011), was an extremely influential Indian dramatist and theatre director, most known for his anti-establishment plays during the Naxalite movement in the 1970s. He was responsible for taking theatre out of the proscenium and into the public arena, when he founded his own theatre company, Shatabdi in 1976. He was a pioneering figure in street theatre as well as in experimental and contemporary Bengali theatre with his egalitarian ‘Third Theatre’, and continues to be one of the most translated Indian playwrights. He was awarded the Padma Shri in 1972, Sangeet Natak Akademi Award in 1968 and the Sangeet Natak Akademi Fellowship, the highest honour in the performing arts by government of India, in 1997. He was proffered with the Padma Bhushan by the government of India, in 2010.

With some young artists trained in NSD workshop held in B.I.T. Mesra Ranchi in 1981 along with some unemployed youth, hailing from tribal and backward areas and some engineers, journalists, teachers, students and industrial workers, Ajai Malkani, Avinash Singh, Bipin Kumar founded the Yuva Rangmanch, with an aim to motivate common people through theatre and other cultural activities, for their active participation in bringing about a change for the betterment of society.  The group has organized 50 workshops in the tribal region and has trained about 1000 budding talents and has successfully given a scientific direction to the theatre movement in Jharkhand by staging 500 shows of almost 50 plays inspiring both rural and urban youth. With its founder director, Ajai Malkani the group members are theatre professionals from NSD, BNA Lucknow and Department of Indian Theatre, Punjab University.