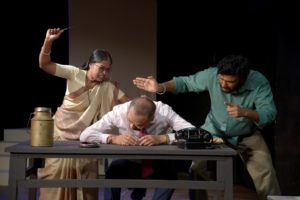 The Play
Emperor Shah Jahan invites the chief engineer of CPWD, Guptaji and shares his dream of building a monument in the memory of his late, wife, Mumtaz. After much deliberation he comes to the conclusion that a mausoleum be built in her memory and he wants it to be named Taj Mahal.
Guptaji, a shrewd, corrupt, official, entraps the Emperor in the snares of bureaucracy and red- tapism leading to many hilarious situations. The ridiculous bureaucratic procedure takes 25 years only to float the tender notice of Taj Mahal.
TajMahal Ka Tender is one of the successful satires of contemporary times.

Director’s note
The state is the best creation of man as it is not an imitation of anything that existed before. With the emergence of the State, a primitive society is transformed into a civil society, leading to the germination of division of labour, division of time, rank, file, red-tape etc., thereby giving birth to official dom. TajMahal ka Tender is a satire on rank –file, red tapism and the sad state of officialdom. It focuses on the organizational diseases that India is suffering due to – corruption, idleness, favoritism, arrogance and insensitivity to public needs.

The Director
Chittaranjan Tripathy graduated from National School of Drama in 1996 with specialization in acting. He was also enrolled in the musical theatre department in the Guildford School of Acting (GSA), Guilkdford, UK, under the Charles Wallace fellowship.
Shri Tripathy has directed plays for many leading theatre groups and repertory companies including the National School of Drama Repertory Company, the Shri Ram Centre Repertory and the Sahitya Kala Parishad Rang Mandal. Some of his most popular plays include TajMahal Ka Tender with NSD Repertory Company, Capitol Express, Arre Mayavi Sarovar with SRC Repertory; Ladi Nazaria and Humare Sheher Ke Romeo Juliet with Sahitya Kala Parishad Rang Mandal.

The Playwright
Born in 1955, at Agra Ajay Shukla is a post–graduate in history from Lucknow University and then joined Indian Railway Traffic Service. His play, Doosra Adhyaay was directed by Ram Gopal Bajaj in 1998, and was broadcast from All India Radio later the same year. In 1993 he received the Delhi Sahitya Kala Parishad’s Playwright – Award for Doosra Adhyaya and Mohan Rakesh Samman for his play Tajmahal Ka Tender. In 2000 he received the National Award by All India Radio (Akashvani) for his play Hum Honge Kaamyab.

The Group
Established in 1964 with a membership of only four persons, the Repertory Company is the regular performing wing of the School. It was set up with the dual purposes of establishing professional theatre on one hand and continuing with regular experimental work on the other. Over the years it has produced a variety of plays ranging from stylized musicals to realistic contemporary Indian drama to translations and adaptations of foreign plays. In addition, several eminent persons of national and international repute have worked with the Company, and it has performed over one hundred and eighty one plays by ninety-eight playwrights and has worked with ninety directors. Quite a few of its actors have emerged as celebrities in theatre, cinema and television. The Company has toured extensively in India and abroad. It is celebrating fifty years of its existence this year.