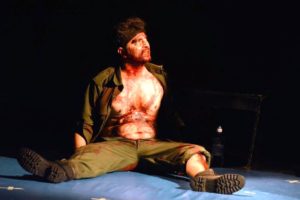 Delhi based lecturer Rajashree and her sister arrive at a country side place to stay in a government guest house. This place is a guerrilla warzone. Rajashree is a self – styled political idealist sympathiser of the guerrillas. An alibi for her presence is that of a researcher pursuing a PhD related to the place. Her sister Sudha is a college girl without an ideology, but flamboyant and rebellious. She is told not to step out of the guest-house. The bored collegiate draws her sister into a discussion around political ideology, questions her leanings, compelling Rajshree to reveal her true purpose. She is an undercover scribe on a mission to uncover the police’s human rights violation for holding a guerrilla leader captive. She seeks permission to meet the leader in lieu of finding out his name. She enters the cell surprised on seeing the guerrilla who (it seems) is no one else, but – Che Guevara! He / his look alike engage and disrobe her ‘pseudo’ socio-political ideology, in conversation. Doubtful, she leaves the cell casually naming the captive leader as, Che Guevara to the police, returning to the guesthouse.  Sub- inspector Sant gleefully reveals the captive’s identity, to be Che and gets beaten for no one believes him. Sudha too is shocked by the sting video. Rajashree reaches the police station to meet the leader and clear her doubts. Sant allows her a last chance while threatening her with death. She confronts Che, but ends up distressed at her inability to justify her belief and his identity. Meanwhile the inspector hears an animal’s howl coming from the captive’s cell. Reaching there he spots a wolf donning Rajshree’s earings and necklace. The sight is full of blood spilling from the wolf’s mouth onto the floor. Che Guevara is witnessing the sight, (defiantly).

At mid-night when the moon rises on top of the sky I always try and find my twin but am attacked always. Memories of childhood have been giving productive-ambiguity to my socio political stand. As it’s like I am in the children’s park digging the soil at my feet and concentrating my whole effort to witness a color – which, punches my head, touches me, penetrates my sweat, grills my eyes, blasts my ears repeatedly. I and they fly probably, from the dug up hole – the three musketeers meet move their heads looking at me I pick my pen up. Something has given birth out of our own critical political ideologies; we then approach the cloudy rehearsals, like boxers punch at their adversaries inside a ring spilling blood in the center. We smell it and approach the unbearable crisis daily. We all put glasses to see the approaching shadow of, supersonic Ernesto Che Guevara – we kiss, hit, dig, burn and hug him finally. Each day becomes its last, the last chance, we explore, deal with this edgy, long lasting poisonous fact. I look around me eternally! Which direction? There’s one… Hash Ernesto Tag Guevara takes birth!

The Director and Playwright

Subhadip Raha began professional theatre in the 1980’s in Siliguri, West Bengal. He is the fourth generation in a family of theatre practitioners. He was trained in theatre at HCRFTA Mandi, Himachal Pradesh and subsequently at National School of Drama 2007. Started teaching at Anupam Kher’s school, Actor Prepares, Mumbai and Center for Research in Film and Television, Delhi. He is on the panel of visiting faculty of Bhartendu Natya Academy, Lucknow. Now, he is creative Director at Indira school of Communication and Acting Academy, Pune. He has directed about 40 plays and acted in hundreds, has also written 5 plays.